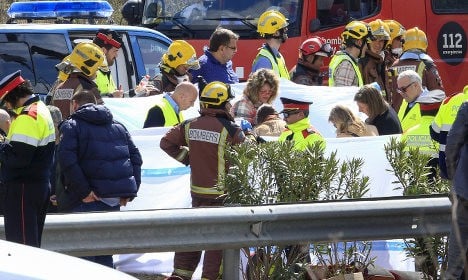 The 62-year-old was detained after Sunday's accident in the northeastern region of Catalonia and had been due to appear before a judge but was hospitalised in intensive care with chest injuries.

“He entered a critical condition in the last few hours. He suffered septic shock in his lung overnight which complicates the situation,” said Toni Comin, in charge of health in Catalonia.

The experienced driver lost control of the coach which crossed the central reservation and crashed into an oncoming car near the small Catalonian town of Freginals, about 150 kilometres (95 miles) south of Barcelona, just before 6am (0500 GMT) on Sunday.

Seven Italians and two Germans were among the dead along with another four passengers – from Romania, Austria, France and Uzbekistan – all of them women aged between 19 and 25.

The remains of four of the victims, all of them Italian, have been identified and are ready to be repatriated, a judicial source said.

'I sent my daughter to Spain and they return her dead'

The majority of the bodies of the victims will be repatriated by Thursday, said the spokeswoman for the regional government of Catalonia, Neus Munte.

Italian Prime Minister Matteo Renzi travelled to Spain on Monday to meet the injured and family members of the victims.

The bus was carrying 57 passengers from about 20 countries, many of them students on the European Erasmus exchange programme in Barcelona, the seaside capital of Catalonia.

Thirty-four people were injured in the crash, 23 of whom remained in hospital on Tuesday, Comin said.

Two were in critical condition, including the driver, and three are in serious condition.
The coach was one of five buses travelling in convoy from the traditional “Las Fallas” festival in the eastern city of Valencia, which is known for the burning of giant statues.

Investigators were looking into both human error and technical problems as possible causes.