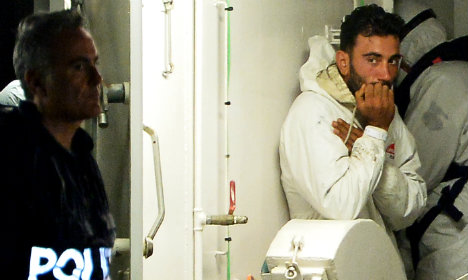 Mohammed Ali Malek (R) after being pulled from the water. Photo: Alberto Pizzoli/AFP

The closed-door preliminary hearing in Catania was held to allow the judge to rule on a request from the defence for the black box of a Portuguese freighter, the King Jacob, to be analysed – a request that was denied.

The King Jacob had rushed to the overcrowded trawler's aid in the early hours of April 19th, but survivors say the captain of the migrant boat collided with the freighter, sending its passengers over to one side and causing the shipwreck.

Tunisian Mohammed Ali Malek was arrested after he was pulled to safety with 27 other men – the sole survivors – and charged with multiple manslaughter.

Those who made it to shore said the boat may have been carrying up to 800 people, and that Malek caused the crash.

Malek, 27, who was cuffed along with his alleged second mate, Syrian Mahmoud Bikhit, is accused of causing a shipwreck and people smuggling.

But his lawyer Massimo Ferrante said Malek said “he was just a migrant on the boat”.

“Most of the time these are migrants picked in the moment (to be captains). They are given a satellite phone, a compass and are forbidden on pain of death to turn back,” he said on the sidelines of the trial.

The trial is being fast-tracked with the prosecution to present its case on May 17th, after which it will be the defence's turn.

Italian Prime Minister Matteo Renzi last year asked the navy to recover the victims from around the boat and retrieve the ship – which lies 380 metres (around 1,245 feet) down off Libya  – so the majority of the bodies, those trapped inside, can be buried.

The navy has so far recovered 169 bodies from near the wreck, which may be brought to the surface late next month.