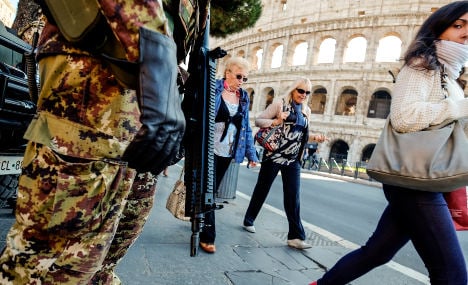 Security in Rome has been stepped up in the wake of the Brussels attacks. Photo: Andreas Solaro/AFP

It’s a city that thrives and depends on tourism, attracting an average seven million people a year.

But the Italian capital has felt the impact of three major terrorist attacks in Europe in just over a year – two in France and now one in Belgium.

In the immediate wake of the Paris attacks in November, in which 130 people were killed at bars, restaurants and a concert hall, hotel booking cancellations rose by 20 percent.

Although it’s still early days, hoteliers are expecting the Brussels attacks, which killed 31 people and injured more than 200, will have the same affect.

“Our bookings have been down since the attacks in Paris,” a hotel manager at Hotel Trevi, told The Local, adding that the hotel has been forced to drop its prices.

“We haven’t yet had any cancellations because of the Brussels attacks, but we’ll see what happens over the next few days. Easter bookings have been low, especially when compared to last year. With the threat of an attack being high, it’s the long-term we worry about.”

The largest group of foreign visitors to Rome are American, accounting for more than a fifth of visitors from overseas.

But in a statement on Tuesday, the US State Department warned its citizens about the potential risks of travelling to and within Europe, as “terrorist groups continue to plan near-term attacks throughout Europe, targeting sporting events, tourists sites, restaurants and transportation.”

Tommasso Tanzilli, the director of the Rome unit of Federalberghi, a hotel association, said the warning would definitely have an impact because “north Americans are always present in cities of art”.

The unit’s president, Giuseppe Roscioli, said that although it’s difficult to forecast how future bookings will pan out, the consequences of the terror attacks will be felt in the tourism sector for some time.

“The Paris attacks had a serious impact [on tourism] especially because they happened in one of the most important international hubs,” he told Rai News.

Italy has raised its security level to 2, the highest possible in the absence of a direct attack. Security has been reinforced at airports, train and metro stations, as well as at the Vatican, embassies and key monuments. Over the past two years, the country has been the target of persistent threats from the Isis extremist group, aimed mostly at the Vatican.

To date, Italy has been spared, or at least well protected from, the wave of attacks by Islamic extremists in Europe that have occurred since the September 11th attacks in New York.

But Massimiliano Travaini, a restaurant owner in Rome, remembers well the fear that Italians lived under between the 1960s and 1980s, when the country was struck by a series of brutal politically-motivated terrorist attacks, the worst being the 1980 bombing by neo-fascists at Bologna train station, in which 85 people died and more than 200 were injured.

“We’ve lived through this fear before, and now we have it with Isis,” he said.

“The risk in Rome is doubled because we have the Vatican, but the level of security has also doubled – I have a lot of faith in the capacity of our security forces.”

Travaini, whose restaurant by the Trevi Fountain in central Rome mostly depends on tourists, said that takings had been lower since the Paris attacks.

“Even if there hasn’t been an attack in a while, people still have the fear of something happening, and especially in famous areas. We're expecting things to be a lot quieter than last year.”