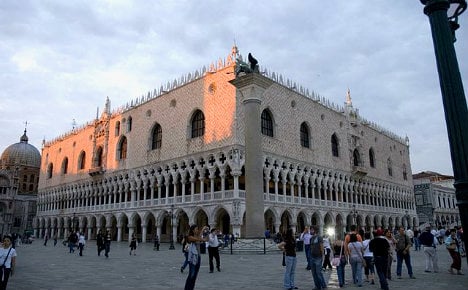 Doge's Palace in Venice was evacuated due to a bombscare on Thursday. Photo: Gaspa
Security staff inside Doge's Palace discovered two strange, tennis ball-sized packages lying on a grid in the building's internal courtyard early on Thursday morning.

The museum was yet to open to the public but staff were evacuated from the building, which overlooks St. Mark's square.

The bomb disposal squad arrived shortly afterwards, but it proved to be a false alarm.

“Suspicions were raised by they way the two bundles had been packaged,” anti-terror investigator Adelchi d'Ippolito told the Veneto edition of Corriere.

“We needed to call in bomb disposal experts to establish that they weren't explosives.”

The packages merely contained quartz crystals, the kind sold by street vendors to tourists throughout the city.

Investigators believe a forgetful tourist left the packages in the courtyard, but the evacuation is testament to the climate of fear gripping Italy.

Similar scenes occoured at Rome's Fiumicino airport on Wednesday morning, when bomb disposal experts were called to investigate a suspicious rucksack, which had been left outside terminal three.

The rucksack – which was adorned with a sticker of the Warner Brother's cartoon canary, Tweety – was given a controlled explosion, but found to contain nothing but clothes.

A video of the intervention can be seen below.