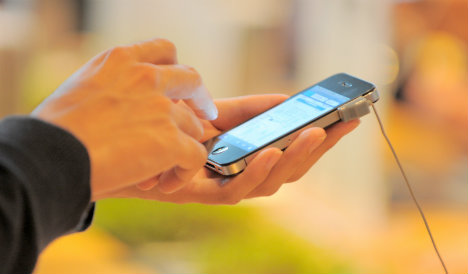 An Italian father wants Apple to unblock his late sons phone and give him back the photos inside. Photo: Kim Jae-Hwan/AFP

If the US tech giant fails, he said he will turn to the elite of the hacking world – Apple's nemesis in the San Bernardino case, which saw the FBI turn to outside help after it failed to force the Silicon valley company to crack a killer's iPhone.

“Don't deny me the memories of my son,” architect Leonardo Fabbretti wrote in an email sent to Cook and the head of the company's software department, following repeated failed attempts to access the teenager's device.

Dama, who was adopted from Ethiopia in 2007, was diagnosed with bone cancer in 2013 after a skiing accident and died in September aged 13 after a series of operations and chemotherapy sessions failed to cure him.

“I cannot give up. Having lost my Dama, I will fight to have the last two months of photos, thoughts and words which are held hostage in his phone,” he said in the letter, sent on March 21st and as yet unanswered.

“I had given my son an iPhone 6 nearly nine months before his death, which he used all the time. He wanted me to have access, he added my fingerprint ID,” Fabbretti told AFP on Thursday.

“Unfortunately, it doesn't work if the phone is turned off and on again,” he said.

Fabbretti contacted Apple Europe five months ago, but its technical team said it had been unable to open the locked phone.

“I think what's happened should make you think about the privacy policy adopted by your company. Although I share your philosophy in general, I think Apple should offer solutions for exceptional cases like mine,” he said in the letter.

“If you compare the reset procedure with opening the front door of a house after you've lost the keys, it's as if the locksmith who opens the door insists on the house being emptied in its entirety first,” he added.

The father, who lives near Perugia in central Italy, said he had contacted the Israeli mobile forensics firm that reportedly helped the FBI crack the iPhone used by one of the shooters in the San Bernardino attack in December.

He said Cellebrite, which has boasted abilities to crack Apple gear, had offered to try to open Dama's phone for free.

He told AFP he will also write to United States presidential wannabe John McAfee, who had offered to crack the San Bernardino iPhone for the FBI in three weeks – or eat a shoe on television if he failed.

Fabbretti said that if Apple failed to help him retrieve the photographs from the phone, he urged it instead to make a charitable donation in Ethiopia or set up a grant for researchers looking into the issues surrounding privacy.