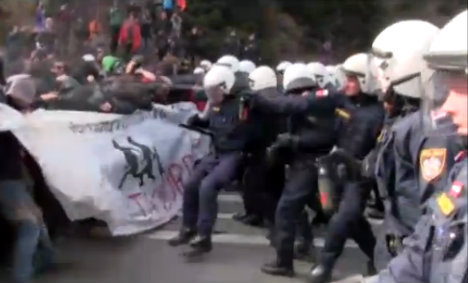 The move was announced by Austria’s Defence Minister Hans Peter Doskozil (SPÖ) in an interview carried out with German newspaper Die Welt over the weekend.

“As the EU’s external borders are not yet effectively protected, Austria will soon ramp up strict border controls. That means massive border controls at the Brenner (Pass), and with soldiers,” he said.

The comments came as 15 people were injured in clashes between police and hundreds of pro-refugee Italian, Austrian and German protesters, who gathered at the Brenner Pass on Sunday to call for an end to border controls.

Italian protesters, who were brought together by social centres across northern Italy, met at Brenner station in South Tyrol on Sunday afternoon before marching towards the border.

But the activists, some wearing life jackets in a show of solidarity with refugees, were blocked by around 100 Austrian police officers before reaching the border.

Some tried to break through the police line by throwing stones and flares, La Repubblica reported.

Austrian police responded with pepper spray, shields and batons – forcing the crowd back.

Ten protesters and five police were injured in the clashes.

The march was organized in protest at the Austrian government's handling of the refugee crisis, specifically its decision to strengthen border controls with Italy in February.

The Austrian army is already being used at other border checks around the country but the latest comments by Doskozil will widen the division between Austria and Germany, who are divided over shutting down Europe's internal borders and keeping them open.

His comments were supported by Austrian Interior Minister Johanna Mikl-Leitner (ÖVP), who said the government was decided in its policy on tightening border control.

Protesters have asked Austria to reconsider, and called on the EU to do more to solve the refugee crisis.

“If Europe worked out a common solution together things would be simpler,” an unnamed protester told Euronews. “Europe has a huge amount of citizens but the number of migrants is tiny really.

“We need to show the rest of the world that we are able to manage the situation, that we are inclusive and that we can plan for the future.”

Italian politicians in the area have reacted to the idea of border controls with scepticism, with regional councillor for Brenner Giovanni Pederzini telling telling local Italian paper Alto Adige that Austria's decision to close the border was based on unfounded fears.

“For the moment even our local refugee welcome centre is empty,” he said. “I'll be curious to see whether they really do put soldiers on the border.”