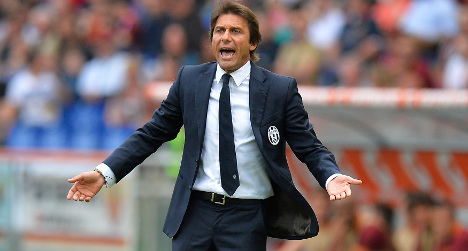 Antonio Conte, who will take over Chelsea after Euro 2016, is accused of sporting fraud. Photo: Andreas Solaro/AFP

The current Italy manager, who will take over Chelsea after Euro 2016, is accused of sporting fraud.

The 'Calcioscommesse' (football-betting) probe maintains that the 46-year-old former Juventus boss failed to expose an alleged rigged second-division match in May 2011.

The game involved Siena, whom Conte managed at that time.

Conte, who denies any wrongdoing, was also ordered to pay an €8,000 fine, by Cremona court public prosecutor Roberto Di Martino.

The May 29th, 2011 game suspected of being fixed for betting purposes ended with a 1-0 away win for Conte's side at Albinoleffe.

Siena gained promotion to Serie A that season, with that success earning Conte the job at Juventus, the club he graced as a player for 13 years.

In 2012, when he was in charge of Juventus, Conte was hit with a 10-month ban by the Italian football federation over the affair, reduced to four months on appeal.

The new man at Stamford Bridge is due to hear his fate on whether he is hit with a criminal sentence in mid-May.

Conte's lawyers elected for a fast-track trial in order to get it wrapped up before the European championships begin in France on June 10th.

Tuesday's development came less than 24 hours after Conte was appointed on a three-year deal to take charge of Chelsea.

Conte took over the Italian national team in August 2014 and secured their Euro 2016 qualification.

He guided Juventus to three straight Serie A titles from 2012-14 before taking charge of Italy.

The 'Calcioscommesse' scandal broke in June 2011 and has seen many well-known figures from football serve bans for match-fixing, such as former Italy internationals Giuseppe Signori and Cristiano Doni.

Around 100 people are still awaiting trial accused with various roles in the vast corruption scandal.