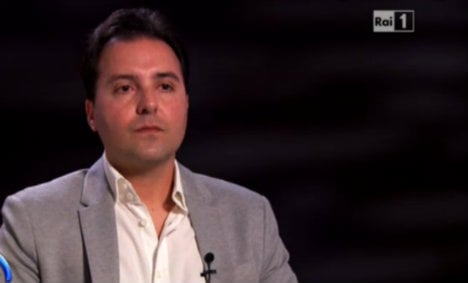 The son of a prominent mafia boss was interviewed by Italy's national broadcaster on Wednesday. Photo: Screengrab/Rai

Salvatore Riina, the son of notorious 'boss of bosses' Toto Riina, also reiterated two of the most persistent myths about the mafia: that it does not really exist as an organised crime syndicate and that its members operate to moral code.

Salvatore Borsellino, whose brother Paolo was assassinated in 1993 on Riina senior's orders, said he had felt sick when he read that state television company Rai had interviewed the son of the mafia killer.

“It will only reopen the wounds of every family that has been a victim of the mafia,” he said.

The interview was conducted by prominent journalist Bruno Vespa and broadcast on Wednesday evening on Italy's top current affairs programme, Porta a Porta.

“I am not the son of a supreme boss, I'm the son of Toto… an upstanding man who respects family and traditional values,” Salvatore said in the interview.

Toto Riina was arrested in 1993 after ruling Sicily's Cosa Nostra with an iron fist for over two decades.

He is believed to have ordered more than 150 murders, including the assassinations of Borsellino and fellow anti-mafia judge Giovanni Falcone.

Salvatore Riina is currently on parole after serving time for mafia association.

Toto Riina's arrest was seen as one of the Italian state's most important victories in its battle against the mafia. Salvatore said he saw it differently because his father had been taken away from him.

“I love my father, my mother, my family, (that goes) beyond what they have been accused of,” he said. “What is the mafia? I don't have a precise answer, the mafia is everything and nothing at all.”

Even Rai's president, Monica Maggioni suggested the decision to broadcast the interview had been a mistake, saying profits from Riina's book should be confiscated and handed to anti-mafia groups.

Rosy Bindi, chair of the parliamentary anti-mafia committee, accused Vespa of “mafia denial” and has summoned Rai bosses to explain the decision.