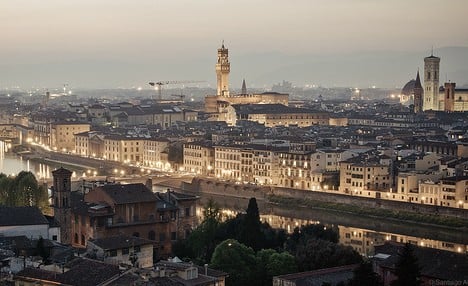 Muslim worshippers in Florence are set to get a big new mosque. Photo: Santiago Almada/Flickr

While Lombardy's right-wing leadership attempted to limit the construction of new mosques, the Tuscan city of Florence has pledged to find premises for a “mega-mosque” in its historic centre to accommodate the Muslim community, who currently worship in a 400-metre square former garage.

People are often forced to pray on the street outside the mosque, located in Borgo Allegri, during the most important weekly meeting in the Muslim church – the Friday prayer of Jummah.

“It's a pretty terrible situation – it's bad for our image as a mosque and bad for the image of the city too,” Imam of Florence, Izzedin Elzir, told The Local.

“We even do two prayer sessions on a Friday, but it's not enough: people are still praying on the street. When it rains it's a tragedy.”

The current mosque is one of three Muslim places of worship in Florence and the only one in its historic centre. It also doubles up as a religious library and research centre.

Members of Florence's Muslim community met with city council leaders on Monday to discuss moving to a new 800-metre site in the centre.

Feasibility studies are currently being carried out and the council has promised that the community will have new premises within a month.

In addition to being granted a bigger and better mosque, the council also confirmed that it is still evaluating the long-term possibility of constructing a large Islamic cultural centre and place of worship – measuring up to 7,000 square metres – in the city.

“In total, Florence is home to some 30,000 Muslims and it would be a great place to build the centre,” Elizir said.

“But these plans have been around for a while and at the moment it's a pretty sensitive issue.”

Meanwhile, a bid by the Lombardy region to limit the construction of new mosques was rejected by Italy’s top court in February.

The region’s right-wing leadership had previously approved regulations, which became known as “anti-mosque” laws, in January 2015, but Prime Minister Matteo Renzi later referred the new rules to the Constitutional Court for review.

The region had sought to subject anyone wanting to build a mosque, or other place of worship for a faith not officially recognized by the state, to an exhaustive list of restrictions, effectively preventing any new construction.

The court ruling fell in line with a government bid to better integrate the Muslim community and followed the announcement in January that a special council, made up of academics and experts in Islamic culture and religion, would be tasked with the job.