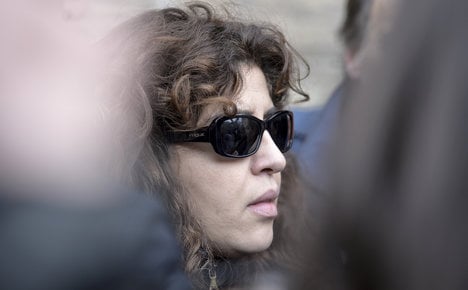 One of Chaouqui's co-accused, Spanish Monsignor Lucio Vallejo Balda, has admitted leaking classified documents to journalists but claims he did so under pressure from his former colleague after she made advances to him culminating in a “compromising” encounter in a Florence hotel in December 2014.

“I never had any sexual relations with him,” the heavily pregnant Chaouqui told the court as she gave evidence for the first time in a trial that was adjourned last month for her to have medical treatment.

“His mother was sleeping in the room while he was speaking to me,” the Italian said.

Chaouqui, who has previously implied that Balda is gay, added: “He confided in me about sexual matters which I will not recount in full out of respect for his status as a priest. The habit he wears has a value for me.”

In another bizarre twist to a case that has already thrown up claims of blackmail, computer hacking and contacts with Chinese spies, she went on claim that Balda had had a relationship with a male astrologer she had introduced him to.

Chaouqui denied having passed any classified documents from a Vatican economic reform panel to Italian investigative journalists Gianluigi Nuzzi and Emiliano Fittipaldi, who are also on trial after publishing books based on the documents.

She also depicted a poisonous atmosphere inside the Vatican after Pope Francis, early in his papacy, established the reform panel to look into issues like the running of the Vatican bank and the management of its vast property portfolio.

“The COSEA (as the committee was known) was seen as a sort of monster in the Vatican, like a foreign body,” she said.

“They were not happy to see me there at all, it was only with the doormen that I had cordial relations.”

Chaouqui said Balda had been a “competent and lucid” colleague when the committee began its work but that everything changed in February 2014 with the birth of a new economic secretariat under Australian cardinal George Pell.

“In May 2014, something exceptionally serious happened, a terrible thing,” she said while declining to give further details, citing her commitment to not spilling Vatican secrets.

Pope Francis was informed and Balda was put in charge of reporting back to him on the incident, she said. When he did, the pope was sufficiently shocked by what he learned to have described it as a “prophecy”, Chaouqui added, again without fully explaining.

Shortly after the incident, Pell ordered the confiscation of all the reform committee's documents and, according to Chaouqui, her relationship with Balda soured from then on as his behaviour became increasingly erratic.

Listening from the dock, Balda repeatedly rolled his eyes towards the ceiling while Chaouqui received a sharp reprimand from the judge in charge of proceedings.

“This court is not a stage. Keep quiet. The questions are for me to ask,” he told her at one point.

The trial, which many Vatican officials regard as a huge own goal, had been scheduled to continue Thursday but has been adjourned until Monday, the Vatican said later.

The Holy See has been widely criticised for prosecuting journalists for revelations about waste and financial mismanagement which the Church has recognised as well-founded by implementing reforms to address them.