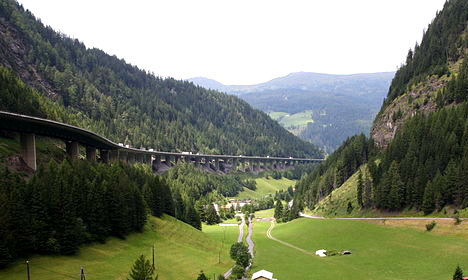 Asutria has begun building an anti-migrant barrier at the Brenner pass, pictured above, on its Italian border. Photo: Arnulf Zu Lindern/Wikimedia

“The structure will be 250 metres long and will cover both the motorway and the main road,” Helmut Tomac, the head of the police in the southern Austrian state of Tyrol was reported by La Stampa as saying.

The guardrails of the motorway and main road are already being taken apart to make way for the barrier and road signs are set to be modified.

In addition to the barrier, a new registration centre will also be built on the Austrian side of the border, while traffic checks could be carried out as early as May from a car park just inside Austria.

The new barrier comes amid Austrian fears that the country is set to see a wave of asylum seekers from Italy following the closure of the so-called 'Balkan route' earlier this year. So far at least, these fears have been unfounded.

The construction of the barrier follows a meeting between Italy's Interior Minister, Angelino Alfano and Austrian Interior Minister, Johanna Mikl-Leitner in Rome on Friday, at which the pair outlined their desire to work together at the border to “safeguard the Schengen principles.”

“This wall violates Schengen rules and is further proof that we are working in small national groups instead of trying to find a common solution,” said Gianni Pitella, president of the Progressive Alliance of Socialists and Democrats, the second largest political group in the European Parliament.