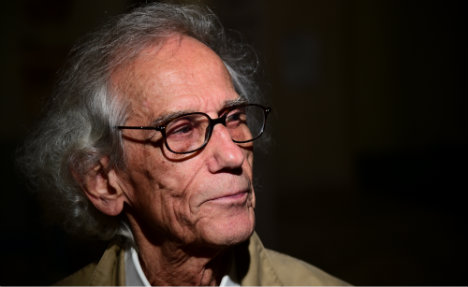 In more than 50 years, Christo and his wife Jeanne-Claude – who died in 2009 but is still associated with his projects – created 22 monumental works.

Dozens more have been left in drawers after permits to enact them were refused.

“We have abandoned some, but others remained in our hearts and minds,” Christo said in an interview with AFP.

“The Floating Piers” is one of them. First conceived in 1970 for the River Plate delta in Argentina, the Christ-like scheme will finally come to life on the idyllic Lake Iseo in northern Italy, from June 18th to July 3rd.

For 16 days, visitors will be able to walk on three kilometres of floating pontoons across the lake, which will connect the islands of Monte Isola and San Paolo, with their picturesque hamlets and Roman ruins, to each other and the mainland.

Made of 200,000 recyclable polyethylene cubes linked by 200,000 giant screws, the piers will be covered with a dahlia-yellow fabric made of tightly woven nylon designed to change tone as the sun sets and become an intense red when wet.

“All our projects are related to physical sensations. I do not like computers, I do not want to talk on the phone. I am related to things viscerally, not virtually,” said an animated Christo, a lean figure topped with a shock of white hair.

“Walking on very small paths covered with canvas, a very solid surface, all of a sudden you start walking on water,” said the Bulgarian-born artist with American citizenship, adding that the experience is something “you have to feel”.

“Floating Piers” is the first work by Christo since 2005, when he created “The Gates” in New York's Central Park with Jeanne-Claude, an installation of 7,500 saffron cloth arches which drew four million visitors.


Forced to abandon the aquatic walkways in Argentina, then again in Japan due to permit troubles, the piers exhibition got the go-ahead in just two years in Italy, thanks to the enthusiasm of local officials and inhabitants.

Christo and Jeanne-Claude, both born June 13th, 1935, brought three projects to Italy in the 1960s and 1970s, including an installation on Milan's Cathedral square in which they wrapped a monument to King Vittorio Emanuele.

The couple first rose to fame for their eye-catching packaging of famous landmarks like the Pont Neuf across the Seine in Paris in 1985 and Berlin's Reichstag in 1995 – a project which took 25 years of bureaucratic wrangling to get off the ground.

An exhibition which focuses mainly on their previous water-based works – complete with preparatory drawings, models, photographs and films – is being shown at the Santa Giulia Museum in Brescia near Lake Iseo until September 18th.

The display of creations since the early 1960s includes “Surrounded Islands”, tree-covered gems in Biscayne Bay in Florida that the artists hemmed with pink fabric in 1983, creating a vast water lily effect.

“Floating Piers” comes with a price-tag of some €10 million and is financed as usual by Christo through the sale of preparatory drawings and models.

The artist has two other projects up his sleeve, though he has run into permit trouble here too. In the first, thought up in 1992, he wants to suspend 10 kilometres (six miles) of silvery fabric over the Colorado River in the United States.

The second would see him create a 150-metre-high (490 feet), flat-topped pyramid out of 410,000 multicoloured oil barrels in the desert near Abu Dhabi.

Conceived in 1977, “The Mastaba” would be the tallest project in his career and the only one of Christo's installations to be permanent.