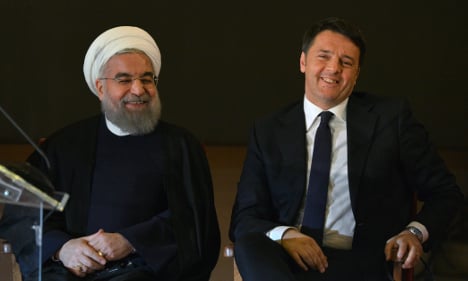 Accompanied by a 250-member delegation, Renzi began a two-day visit to the Islamic republic aimed at restoring ties that before sanctions had seen Italy ranked as Iran's top European trading partner.

Following an official ceremony he held talks with President Hassan Rouhani, who visited Rome in January days after sanctions were lifted under the nuclear accord.

“Italy has a special place among Iranians. Its companies and its industry are appreciated here,” Rouhani said at a joint press conference, after signing provisional agreements on energy, tourism, railways and infrastructure.

“Italy is at the forefront among EU countries wanting to develop relations with Iran,” he added.

Annual trade between Iran and Italy – a member of the G7 group of leading industrialised nations – peaked at about $8 billion (€7 billion) but a decade of nuclear-related sanctions saw the figure plummet to $1.8 billion currently.

When Rouhani visited Rome the two countries agreed initial terms on long-term contracts that could be valued as high as $19.4 billion, including deals in the oil, transport and shipping sectors.

Iran has said it wants European help to modernise and expand its rail, road and air networks, as well as seeking investment to boost its manufacturing base, notably in the automobile industry. All were severely damaged by sanctions.

When Rouhani was in Rome he talked of rebuilding a relationship between “two superpowers of beauty and culture” that dates back to the days of the ancient Roman and Persian empires.

Renzi has spoken of plans for cultural and academic exchanges.

Rouhani's visit to Rome however also prompted criticism that Renzi's government was going too far in its efforts to charm Iran's theocratic rulers.

It emerged just after Rouhani had left Italy that ancient nude statues in the capital's City Hall had been covered up by wooden boxes to spare the Iranian president any possible embarrassment.

The diplomatic niceties also extended to ensuring that no alcohol was served at any of the official meals during Rouhani's stay – a gesture France was not prepared to make, meaning plans for a state banquet had to be scrapped in Paris.

The rapprochement has been possible because of the nuclear deal which Iran and six powers – Britain, China, France, Russia and the United States plus Germany – struck last July after more than two years of negotiations.

The accord was implemented in January with sanctions being lifted in exchange for curbs lasting at least a decade on the Islamic republic's nuclear programme.

Iran has always denied Western allegations that it sought to develop an atomic bomb, insisting that its atomic activities are for peaceful energy development and medical research purposes.