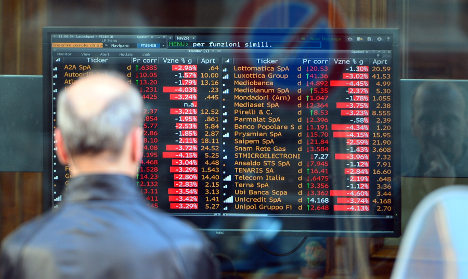 Shares in Italian banks had closed higher in Milan in anticipation of the decision. Photo: Giuseppe Cacace/AFP

Italian banks are currently saddled with some €200 billion worth of non-performing loans, Radiocor said, citing the Bank of Italy.

One of the new fund's first actions will be to intervene in the recapitalization of the Banca Popolare di Vicenza to the tune of €1.75 billion from next week, ahead of a similar intervention in the Veneto Banca in June, the agency said.

The decision came after a meeting on Monday between finance ministry officials and representatives of major banks and financial institutions.

Shares in Italian banks had closed higher in Milan in anticipation of the decision, with Banco Popolare soaring 10.3 percent and Banca Monte dei Paschi di Siena jumping 9.8 percent as the market rose 1.25 percent.

Even larger banks like Intesa Sanpaolo and Unicredit climbed higher, gaining 3.1 percent and 5.1 percent, as the reported plans would ease their burden in guaranteeing the operations in buying shares in smaller banks.

The gains came in marked contrast to the repeated heavy losses suffered by banking stocks since the start of the year.

The European Union and Italy reached an agreement in January on creating a guarantee vehicle to help Italian banks sell bad loans, after the two sides spent more than a year trying to thrash out a solution that did not contravene EU rules on state aid.

Under the plan, the guarantees will be established at market prices and will therefore not be regarded as state aid.