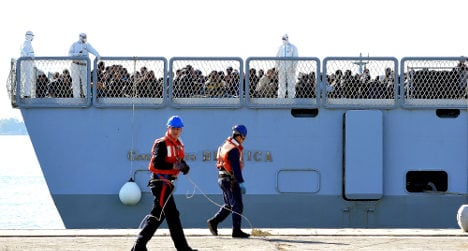 Some 17,500 migrants have arrived in Italy since the start of the year.Photo: Alberto Pizzoli/AFP

Two small boats carrying a total of 740 people were intercepted by the coastguard ship Diciotti, while Italian Navy vessel Cigala Fulgosi came to the aid of two inflatable dinghies with 255 people on board, a coastguard statement said.

A merchant ship was diverted to help another 117 people, while an EU naval force vessel picked up 738 migrants trying to cross on two barges and a small boat.

According to UN refugee agency data at the end of March, some 17,500 people have arrived in Italy since the start of the year.

Two weeks ago nearly 1,600 migrants were rescued in the same area, adding to fears that calmer seas at the onset of spring are encouraging greater numbers of migrants to attempt the perilous crossing after a winter lull.

There are also concerns that European efforts to shut down the migrant sea crossing from Turkey to Greece will encourage more people to attempt the more dangerous Mediterranean passage from Libya to Italy.