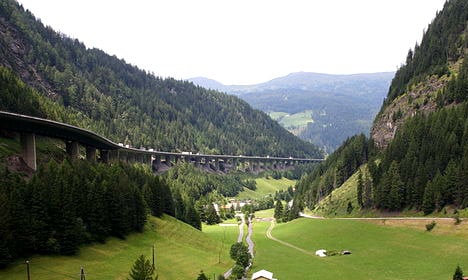 Asutria has begun building an anti-migrant barrier at the Brenner pass, pictured above, on its Italian border. Photo: Arnulf Zu Lindern/Wikimedia

Austrian police said construction work started on Tuesday on concrete foundations for a planned control area off the northbound motorway at the Brenner pass in the Alps.

Austria, which has adopted an increasingly hardline stance after receiving 90,000 asylum claims last year, has already stepped up border controls along its borders with Slovenia and Hungary.

“If these plans should materialize then we will have to look at them very seriously. The Brenner pass is essential for freedom of movement within the European Union,” she told a press conference. “The Commission is very concerned.”

The Italian ministers said the Austrian actions “did not appear to be based on the facts”, adding that Mikl-Leitner had “presented no data showing an alleged increase in the migrant flow from Italy”.

The passport-free Schengen zone, a cherished symbol of European unity, has come under threat as the continent battles its worst migration crisis since World War II, with several countries reintroducing border controls to stem the massive influx of migrants, many of them refugees from war-torn Syria.

“The re-introduction of border controls at internal Schengen borders has to be exceptional and proportionate,” Bertaud said.

“The Commission will assess any measures that are taken by the Austrian government from the perspective of the necessity and the proportionality of the measures.”

Austria is concerned that following the closure earlier this year of the Balkan trail from Greece towards Austria, a new route across the sea from Libya to Italy and then northwards will open up.

But Bertaud said: “For the time being there is indeed no evidence that flows of irregular migrants are shifting from Greece to Italy, although we have seen an increase in the numbers of people arriving to Italy.”