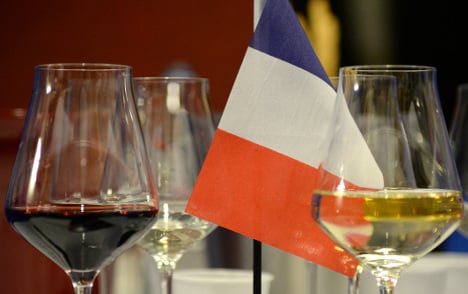 Italian Prime Minister Matteo Renzi made the comments on a trip to Italy's Verona earlier this week.

“Italian wine is better than the wine in France,” he said, although it wasn't clear how much Chianti he'd had at the time.
His claim certainly caught the attention of the French media, which seem shocked at his words.
Renzi had said something similar to France's President François Hollande at a recent meeting between the pair, to which the French head of state simply replied “but ours is more expensive”.
In terms of global popularity, Renzi may be right – after all, Italy did overtake France to become the biggest export of wine in the world, late last year. Hollande and Renzi, sharing a laugh (perhaps about wine…)
But whose wine is actually best? If you ask leading US wine critic Robert Parker – who is famed for his $1 million nose – he'd probably side with France.
After all, out of 300 wines in the world that the American has ranked as perfect in his famed 100-point rating system, 204 have been French.
And if quality is indeed reflected in price, the Italian premier seems wrong again. According to Wine Searcher's ranking of the 50 most expensive wines in the world, 38 of the top 50 are from France. Italy can boast none.
For the record, the number one place went to the Domaine de la Romanee-Conti Romanee-Conti Grand Cru, Cote de Nuits, which sells for an average price of $13,166. A glass of red wine at the Chateau Smith Haut Lafitte vineyard in Leognan, southwestern France.
But wine experts in France think Renzi was wrong, even “stupid”, to even try and compare the two.
Bert Celce, a Frenchman running the Wine Terroirs blog about wine tasting in French vineyards, says wine simply can't be measured by country.
“You can hardly compare a group of wines 'nation per nation' as each time it's a different story when you drink a particular wine,” he tells The Local.
He added that French wine wasn't better in general, either.
“If a French minister ever said French wines are better, I would find that very stupid because wine production in France is a mixed bag, there are a lot of uninteresting wines alongside the great stuff,” he said.
“That might be the same for the Italian wine scene, I don't really know. Most, if not all, French politicians who speak about the 'French wines' in general don't fully grasp the different level of quality beyond the the AOC (the origin); they're more into branding, I think.” Rosemary George, a Master of Wine who regularly writes about French wine, says France's strong reputation speaks volumes.
“France has set the international standards – if you make sparkling wine in the New World, you look to Champagne; if you grow Pinot Noir, Burgundy is your benchmark, and so on,” she told The Local.
“In contrast, Italy has a wealth of unknown and obscure grape varieties, and very few with any international recognition, though that is slowly changing.”
George, who has penned two books about Chablis, came up with no surprises when pressed for a favourite.
“I'd take a mature vintage of a Grand cru Chablis, from Vincent Dauvissat,” she said. French winemaker Louis Moreau surveys his Chablis designated vintage vineyards.
Chrissie McClatchi, who runs the Riviera Grapevine blog, agrees that it's close to impossible to stack the two nations' wines against each other.
“Italian wine is fascinating for its diversity, for their grape varieties that you can't find anywhere else,” she told The Local.
“And when the Italians try their hand at traditional French varieties, such as in Tuscany with the SuperTuscans, they rival the best of Bordeaux,” she added.
“French wine, on the other hand, is classic. To me, it still is the benchmark for quality and reflection of terroir that most other winemaking countries seek to emulate… you only need to look at Champagne really to appreciate this.”
She added that while Italy could boast “a voyage into the exotic”, she'd still prefer something from France.
“There's nothing quite like a dry, refreshing Côtes de Provence rosé on a hot summer afternoon no matter where in the world you are. No one does rosé like France, even the Italians,” she said.
While it may be a futile game to try and compare the wines of two different countries, that doesn't mean you can't enjoy them both.
Here are a few some of the international gold trophy winners from Decanter World Wine Awards from 2015 – from both countries.
France
– Château Bouissel, Le Bouissel, Fronton, Southwest France, France 2011, for a Red Blend under £15
– Château la Tour de l'Evêque, Pétale de Rose, Côtes de Provence, Provence, France 2014, for a Rosé over £15
– Piper-Heidsieck, Brut, Champagne, Champagne, France 2006, for a Sparkling over £15
Italy
– Fattoria Dianella, Il Matto delle giuncaie, Rosso Toscana, Tuscany, Italy 2013, for Red Italian Varietals under £15
– Rivetto, Leon, Barolo Riserva, Piedmont, Italy 2009, for Red Italian Varietals over £15
– Tiefenbrunner, Feldmarschall von Fenner zu Fennberg, Alto Adige/Südtirol, Trentino-Alto Adige/Südtirol, Italy 2013, for White Single-Varietal over £15
READ ALSO: Eight tips on buying wine in a French supermarket