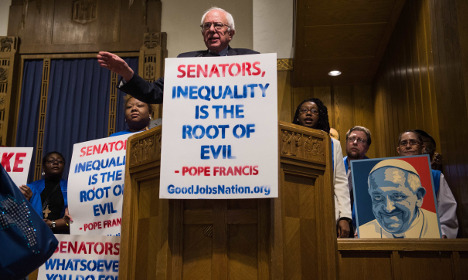 "I am not a Catholic, but there is a radiance that comes from him. It was very wonderful to meet him," Sanders told ABC. Photo: Nicholas Kamm/AFP

“He is a beautiful man,” Sanders told ABC in an on-camera interview.

“I am not a Catholic, but there is a radiance that comes from him. It was very wonderful to meet him,” Sanders told ABC.

Sanders' wife Jane is Catholic, but he describes himself as a secular Jew.

“I just conveyed to him my admiration for the extraordinary work he is doing raising some of the most important issues facing our planet and the billions of people on the planet and injecting the need for morality in the global economy,” Sanders said.

Jane Sanders told ABC that just four people were in the room during the meeting at Santa Marta, the pope's residence: the Sanders couple, Francis, and the Argentine head of the Pontifical Academy of Sciences, Marcelo Sanchez Sorondo.

Sanders has praised the pope's position on the global economy and the environment, even though he differs with the pontiff on issues like gay marriage.

The US candidate traveled to Rome at the invitation of the Pontifical Academy, a kind of Vatican think-tank on social, economic and environmental issues, for a Friday conference.

Sanders spoke to Francis just before the pope traveled to meet migrants on the Greek island of Lesbos, the frontline island in Europe's migration crisis.

The self-described democratic socialist US candidate said that Francis apologized for not being able to make it to the Friday conference due to conflicts with planning for his Saturday trip.