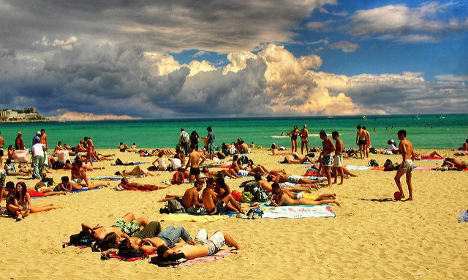 Terrorist attacks at beaches in Italy, Spain and France have been dismissed as "groundless". Paolo Macorig

In a sensational report on Tuesday, the German daily, Bild, said that jihadists were planning to pose as refreshment sellers at beach resorts in the three countries, before detonating suicide vests and bombs planted beneath sun loungers.

A source at Italy’s anti-terrorism department dismissed the report when contacted by The Local.

Meanwhile, a source at the Italian intelligence services was quoted by Ansa as saying the claims were “groundless” and that “there is no specific terror alert on Italian beaches”.

The newspaper also quoted Seck Pouye, the chief of police in Senegal, who said that the terrorists, from the Boko Haram Islamist group in Nigeria which allies itself with Isis, planned to radicalize regular travellers between Senegal and Europe to carry out the attacks.

Italy has upped security following terrorist attacks in Paris and Brussels in recent months and after receiving threats from Isis.

A total of 259 people were arrested on terror charges in Italy in 2015, with 67 of them being expelled from the country as a result. Among these was a Moroccan man, deported in late December after saying he would “blow up Rome”. A further nine have been deported since January.