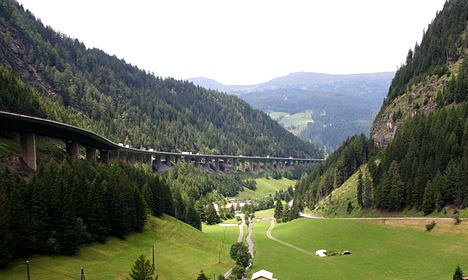 A German politician has said the introduction of border controls at the Italy-Austria border could result in a 'second Idomeni'. Photo: Arnulf Zu Lindern/Wikimedia

Over 10,000 refugees and migrants are currently residing in a makeshift refugee camp in the northern Greek town of Idomeni after Macedonia closed the border earlier this year.

Austria – who strongly advocated for the closure of the west Balkan migrant route – recently started to build a border checkpoint and a road barrier at the Brenner pass between Austria and Italy.

The measures are part of a national effort from Austria to prepare for what authorities expect will be a repeat of last summer’s wave of refugees and migrants making their way to Europe seeking protection and a better life.

German politician and head of the European People’s Party Group Manfred Weber said yesterday that Brenner could become a “second Idomeni” if the area ended up being cordoned off by Austria’s border controls, causing a backlog of people on the Italian side of the border.

Speaking to journalists whilst inspecting the site, Weber called on Austria to only introduce the planned measures in “extraordinary circumstances” and for the two countries to sit down together to discuss the matter.

The visit was welcomed by Austrian politician Othmar Karas (ÖVP), who has criticised the warnings from Doskozil about possibly closing the border.

“Whoever wants to close the Brenner has learned nothing from history, neither Austrian nor European history,” said Karas, quoted in the ORF.

“Fences inside Europe are the symbols of a failed collaboration. If all countries implemented and applied the jointly agreed EU agreement, there [would be] no need for border fortifications inside the EU.”

Austria's foreign minister Sebastian Kurz defended the measures, however, saying that there was much historical awareness in Austria “but also realism”.

“No-one closes Brenner, if you introduce border controls. The free movement of people and goods continues – and yes, in an ideal case there are no border controls,” he said, adding that it became necessary after Austria was “left alone” to deal with the crisis.

Just last Friday, Italy insisted it was not facing an “invasion” after a spike in migrant boat crossings from Libya exacerbated fears the country is on the verge of becoming the main entry point for people trying to reach Europe.

Nearly 6,000 mostly African migrants have landed at southern Italian ports since Tuesday but Prime Minister Matteo Renzi said the overall trend this year was broadly in line with the 2015 pattern.

Yesterday hundreds of migrants died after their boat capsized in the sea between Libya and Italy. Survivors said they believed up to 500 people died, although the coastguard has not yet confirmed the figure