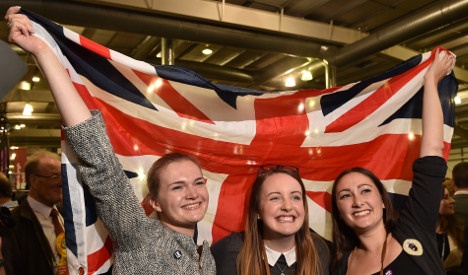 Britain’s upcoming referendum on whether to remain in the EU will have a huge effect on the two million Brits living in Europe. Photo: Leon Neal/AFP

In order to be able to vote in the referendum, expats need to hold a British passport and to have been resident in the UK within the last 15 years. Just under a quarter of our respondents fit those criteria – a total of 673 people. And of those who had the right to cast a vote, an overwhelming majority (86 percent) said they were planning to do so.

As to those who were not planning to vote, the main reason for abstaining (selected by 49 percent of the non-voters) was that it was too complicated to register.

Meanwhile, 11 percent felt that their vote did not matter, while seven percent didn’t think they would be affected by the outcome of the referendum and a further seven percent did not understand enough about the issue.

Of those who intended to vote in the referendum, only 75 percent had already registered – and of the remaining 25 percent, a majority (68 percent) did not know how to vote.

If you are an expat living in the EU and want to have your say in the referendum but don't know how, read our ten-point guide to registering here.

James McGrory, Chief Campaign Spokesman of Britain Stronger In Europe, said: “This survey shows the overwhelming consensus among Brits living abroad for remaining in Europe. As a full EU member, British people can travel, live and work freely across Europe, and they’re entitled to free healthcare if something goes wrong.

“If we left, no-one can guarantee that would continue. The 'Leave' campaign's plan for Britain – to pull the UK economy out of the single market altogether – could see every British expat’s automatic right to live abroad thrown into doubt.”

Barbara McLeod, a British business consultant who has lived in Italy for three years, first in Rome and now in Milan, agreed.

“I am for staying in to keep it easy for me to work and travel in the UK,” she told The Local.

“I think the UK will lose jobs, trade and global influence if out of the EU. We're stronger together!”

But another long-term British professional based in Rome is less convinced, despite being a seasoned expat.

“Remember those three-legged races at school? You would run 50 yards until the rope practically burned your leg off, and you collapsed in a heap,” he said.

“Well now imagine 28 countries with their legs tied together each trying to run in their own direction. The rope is frayed, as the bullies pull here and there and the young kids are getting trampled on. So is Brexit the answer? Possibly. I love Europeans – I went to school with them – That's why I think maybe we should save them from the EU.”

When contacted by The Local, a Vote Leave press officer said she was not in a position to comment on expat voters or the impact of the referendum on Brits living abroad. A spokesperson for the Better Off Out campaign, who did not wish to be named, said that their group hadn't had any contact with British expats. “I can't make a judgment on how expats would be affected by the referendum result – individuals can make their own minds up. We are concentrating on making a positive case to all voters and hope that those who wish to vote will recognize the benefits for the UK.”

However, some 58 percent of voters said they would be trying to persuade others to vote in a certain way – so don’t be surprised if you find the referendum an increasingly popular topic among your expat contacts. The most popular method for trying to sway their friends’ votes was in conversation (84 percent), while 46 percent said they would take to social media to spread the word.