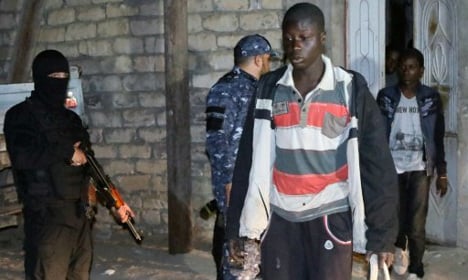 Maetig made the appeal while in Rome meeting with Italy's Interior Minister Angelino Alfano.

According to the March 18 agreement, Turkey agreed to take back all migrants arriving in the Greek islands, in an effort to relieve the pressure on the European Union that saw one million migrant arrivals since early 2015.

In return Europe promised to resettle one Syrian refugee for every Syrian taken back by Turkey, to grant visa-free travel to Turks within the border-free Schengen zone and to reassess Turkey's stalled EU membership bid.

Maetig “thanked Italy for aiding the Libyan people, and expressed hopes that Italy would continue to play a key role in the national reconciliation process towards the construction of a united and democratic Libya,” the statement said.

Alfano added that the two had also agreed to work together to combat terrorism and human trafficking.

Libya has had two rival administrations since a militia alliance took over Tripoli in mid-2014, setting up its own authority and forcing the elected parliament to flee to Tobruk.

The international community sees the Government of National Accord as the best hope for oil-rich Libya, which has been roiled by turmoil since the 2011 ouster and killing of dictator Moamer Kadhafi.

Thousands of migrants, many from sub-Saharan Africa, use Libya as a point from which to leave for Italy.