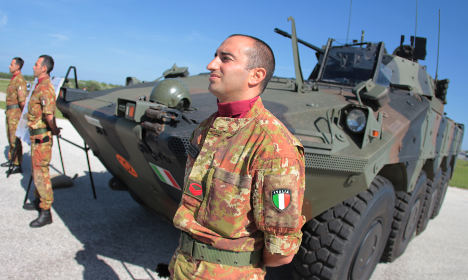 Italy has denied that it is planning to send between 600 and 900 soldiers to Libya. Photo: Marcello Paternostro/AFP

Corriere della Sera reported on Tuesday that Italy was “ready to send the troops” to guard sensitive sites, such as oil fields, as well as train local security forces.

The report came after Libyan Prime Minister Fayez al Sarraj called on the UN, EU and neighbouring African countries to help his country protect its oil resources against the Islamic militant group, Isis.

A spokesperson for the ministry denied the claims made in the report, telling The Local they were unfounded.

Other hints at plans by Italy to send troops to Libya, where achieving stability is a priority of Prime Minister Matteo Renzi’s government, have been made in recent months.

In March, the US Ambassador to Italy, John Phillips, told Corriere that Italy could send up to 5,000 troops, a claim which was denied by Renzi.

Italy’s Foreign Minister Paolo Gentiloni visited Tripoli earlier this month to bolster the unity government struggling to end Libya's chaos. It was the first visit by a top Western official since 2014.

Libya has been plagued by instability since the 2011 uprising that ousted longtime ruler Muammar Gaddafi, with Isis taking advantage to seize territory.

The jihadist group last year seized control of Gaddafi's coastal hometown of Sirte and has been fighting to expand to other areas.

The oil-rich country, where Italy's Eni has a big presence, has had two rival administrations since mid-2014 when a militia alliance overran Tripoli, setting up its own authority and forcing the recognized parliament to flee to the remote east.

Italy has played a leading role in international efforts to pressure Libya's warring rivals to rally behind the unity government.

Meanwhile, in a move backed by the US, Nato is three months away from launching patrols off Libya as part of a plan to stop migrants arriving in Italy, Italian Defence Minister Roberta Pinotti said on Monday.