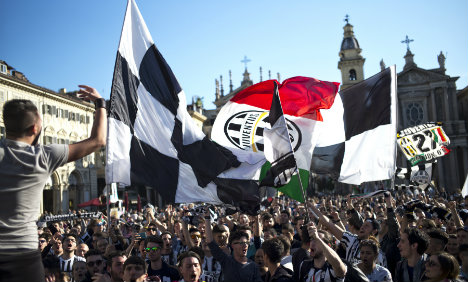 Juventus won their fifth Serie A title in a row on Monday. Photo: Marco Bertorello/AFP

Juventus, emulating their feat of 1935 when the Turin giants won a fifth straight title for the first time, had gone 12 points clear of Napoli with a 2-1 win at Fiorentina on Sunday when goalkeeper Gianluigi Buffon made a last-gasp penalty save from Nikola Kalinic.

Napoli had to beat Roma to have any chance of maintaining their bid for a first title in 26 years, but Maurizio Sarri's men were stunned when Radja Nainggolan hit an 89th-minute winner for the hosts at the Stadio Olimpico.

It left Juve 12 points clear of Napoli with only three games remaining this season. Napoli remain second but are now just two points ahead of Roma as the pair battle for the league's second automatic Champions League qualifying place.

“It was an epic title, won thanks to an unbelievable comeback,” said

Juventus captain and goalkeeper Gianluigi Buffon in reference to Juve's fightback from a dismal start to their title defence.

“I'm super happy to make history with this team, it's priceless,” said Argentine striker Paulo Dybala, who has hit 16 goals this season to sit second in Serie A's scoring charts behind Gonzalo Higuain (30).

“It's amazing to win the league title with Juventus. I hope there are many more to come.”

While Roma celebrated their victory, the big party was going on in Turin, where thousands of fans watched the Napoli game on big screens in anticipation of their side's title triumph.

There were also jubilant scenes at Juve's Vinovo training ground, where the Turin giants celebrated the result in Rome with a giant bottle of champagne.

Meanwhile, Juve coach Massimiliano Allegri, who was rumoured to be close to the exit door last autumn following a disastrous start to their title defence, underlined the champions' impressive comeback in a series of posts on Twitter.

“I always say that you can only improve by enduring the hard times. Looking at our season, it makes me even more proud,” said Allegri, who steered Juventus to their first league and Cup double in 20 years in his first season in charge last year, as well as a first Champions League final appearance in 12 years.

In a reference to Juve's struggles at the start of the season, when they took only one win from their opening six games, he added: “Serie A isn't the final of the 100 metres, but a marathon. You need patience to find the right rhythm.”

Defender Leonardo Bonucci, who was seen soaking fans waiting at the gates of Vinovo with champagne, told Sky Sport: “They had us dead and buried in October, but Juve never die.”

Napoli travelled to Roma on Monday – a national holiday in Italy – primarily looking for the win that would keep their third-placed hosts at bay.

Argentine striker Gonzalo Higuain, with 30 goals so far this season, made his return from a three-match ban handed out after a dramatic meltdown at Udinese three weeks ago when the visitors lost 3-1 to see their title hopes all but vanish.

But in summer-like weather, Roma's bid to qualify automatically for next season's Champions League inspired the hosts to a solid display in which Higuain was given few chances to increase his impressive goals tally.

The Argentina international had three shots on goal, but was thwarted on each occasion by Roma 'keeper Wojciech Szczesny.

The match looked to be heading for a draw until Egyptian winger Mohamed Salah held off several players to set up Nainggolan for a superb first-time strike that beat Pepe Reina from the edge of the area.

Overall, it was a bitter outing for Sarri's men, who are now only two points ahead of Roma with three games remaining.