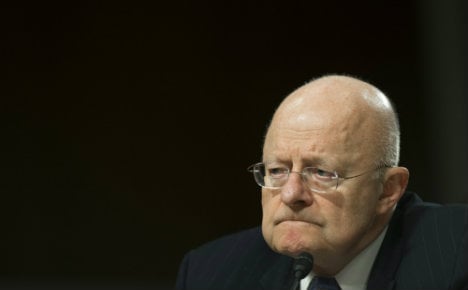 US intelligence official James Clapper has spoken of dormant Isis cells in Italy - but how real is the threat? Photo: Saul Loeb/AFP

James Clapper, the US director of national intelligence (DNI), made the comments during a news conference organized by the American newspaper Christian Science Monitor on Monday morning, when a reporter asked him directly about whether Isis operates clandestine cells in Germany, the UK and Italy.

“Yes, they do,” he said. “That is a concern obviously, of ours and our European allies.”

“We continue to see evidence of plotting on the part of Isil in the countries you named,” Clapper added, referring to Isis by its alternative acronym.

Although reports of Isis activity in all three countries are not new, it is the first time Clapper has confirmed the presence of clandestine terror cells.

Meanwhile, Isis has made no secret of its desire to launch attacks in Italy, with a series of videos threatening to seize Rome, and in particular, the Vatican.

Clapper's comments also come a week after the German tabloid newspaper, Bild, published a report, citing Italian and German secret agents, saying that Isis terror cells were ready to launch attacks on beaches in Italy, France and Spain. The report was later denied by the Italian intelligence services.

But how real and present is the threat to Italy?

“Clapper's comments are noteworthy as they come from the man who has the most up-to-date intelligence available,” Lorenzo Vidino, the director of The Programme on Extremism at George Washington University, located in the US capital, told The Local.

“But his words are really just a reaffirmation of something we have long known. As far a the terror threat to Italy is concerned, nothing has changed recently.”

Italy's terror alert has been at 'level two', the highest level possible without a direct attack, since the attacks in Paris in November, in which 130 people were killed.

The country is political target for Isis, as the government is actively working as part of the anti-Isis coalition with other western powers. But it also has a symbolic value for the jihadist group.

Rome is the seat of the Catholic Church and the former capital of the western world's greatest empire.

Since the first Isis video promising an attack on Italian soil emerged in December 2014, terror cells in Libya have been releasing videos promising similar death and destruction almost every day.

But in spite of the repeated threats, Vidino said Italy has less to fear than Germany, France and the UK.

“There's not really a 'jihadist scene' in Italy…there are no big recruitment areas for Isis,” Vidino explained. “The number of foreign fighters Isis has managed to recruit from Italy over the last two years is considerably lower than in other countries.”

France has seen over 1,000 nationals flee to fight with Isis, Belgium 800 – but in Italy, just 50 people are thought to have taken up arms for the group since 2013.

In addition to the organization lacking a fertile breeding ground, the Italian secret service has been working furiously to foil planned attacks and stop recruiters from spreading Isis propaganda.

The government's stance is clear – any foreign national found guilty of inciting or engaging in extremist violence is deported.

According to Italy's Interior Ministry, 67 of the 259 people arrested on terror charges in 2015 were expelled from the country.

“Most are just shipped out overnight,” Vidino said.

In addition to its no-nonsense approach to deportation, the government deployed an extra 700 troops to the streets of Rome in the wake of the Paris attacks.

The troops will stay at least until the end of the Christian Jubilee of Mercy in November, in a bid to protect the capital from extremist violence.

“I would say that so far, Italy's efforts to prevent terrorism have been a relative success story. In saying that, if an attack happened tomorrow I wouldn't be surprised,” Vidino added.