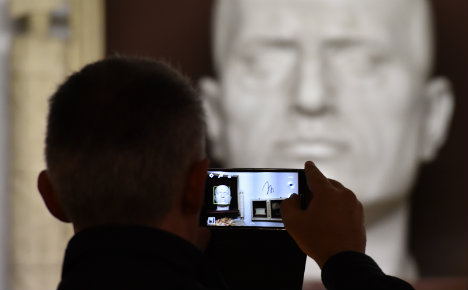 The three-storey edifice in the middle of Predappio is no ordinary building: its abandoned state is the result of a dark past as the regional headquarters of the former dictator's Fascist Party.

The mayor, Giorgio Frassinetti, is the only keyholder to a building that dominates the centre of the little central Italy town where Mussolini was born and buried, after his execution on April 28th, 1945.

Frassinetti hopes the 1920s construction will not lie empty for much longer: 71 years after Mussolini's death, Predappio finally seems to have reached a consensus on renovating it as a museum dedicated to the town's most famous son.

Or, to be more precise, a “research and archive” centre dedicated to the subject of fascism.

Predappio's existing status as a place of pilgrimage for a new generation of Mussolini admirers means anything that could be construed as a homage to 'Il Duce' was out of the question.

The town has frequently been accused of encouraging neo-fascists by allowing them to stage commemorative events three times a year at which theoretically illegal fascist salutes are the order of the day.

Local traders have had no qualms about capitalizing on the connection with souvenirs of questionable taste, from Mussolini-themed babywear to bottles of wine featuring his rotund face on their labels.

Frassinetti wants that to change but says the town cannot escape its Mussolini ties.

“We had to free the town from the hands of those who think this is all it is about and the way to do that is through culture and historical research,” the mayor told AFP as a group of skinheads in military fatigues lingered outside the old fascist headquarters.

“It is natural that it stirred up debate and that people had very different views, but I firmly believe the only way forward was to address the theme in a neutral way.

“The real enemy in all this is ignorance and the trivialization of history.”

The centre-left mayor cited last year's opening of a museum on the history of Nazism in the movement's birthplace Munich as an example of what could be done.

“Italy also has to settle its accounts (with the past),” he said.

Historian Marcello Flores agrees. “It has long been a taboo subject. But the time of blanket moral judgements and condemning without trying to understand, that is finished,” he said.

Italy's centre-left government has given its backing to the project and agreed to contribute to the six million euros ($6.7 million) needed to renovate the building in time for a planned 2019 opening.

Hitler 'his only mistake'

A little outside the town, the small cemetery where Mussolini is buried has a peaceful air.

But in the ornate family crypt, the visitors' book attests to his continuing hold on a section of the Italian population: “Come back” and “Italy needs you” are among the messages written by some of the 50,000 visitors who come every year.

Thursday, the anniversary of Mussolini's 1945 summary execution by Partisan resistants, is likely to be another busy day.

Outside the house where Mussolini was born, in 1883 to a blacksmith father and teacher mother, Orlando Bonotto says he has travelled 300 kilometres (190 miles) from Treviso in northern Italy to pay his respects.

Mussolini ended democratic government and led Italy into a disastrous alliance with Nazi Germany that led to the country's ruin and 7,500 Italian Jews dying in Hitler's death camps.

But the back-shirted pensioner is adamant Italy would be better off today under someone like his hero.

“I am on the right and I thank this gentleman for what he did,” Bonotto said.

“His only mistake was to ally himself to Hitler. And since the 50s, how many of Italy's politicians have simply lined their own pockets?”

It is opinions like these that anti-fascists fear could be encouraged by making Mussolini more of a focus for the town.

But after its initial hesitation, the National Association of Italian Partisans (ANPI) has also given the museum project their blessing.

Local ANPI president, Carlo Sarpieri, said Predappio had to create an alternative optic on its past.

“We need a balanced perspective and an end to this unacceptable denial (of what fascism represented),” he said.

“It will never become something that glorifies fascism.”

Comforting words for a mayor exhausted by seven years spent trying to get the project of the ground. “I'm confident but if I think I am doing the country a disservice, I will stop everything,” Frassinetti said.