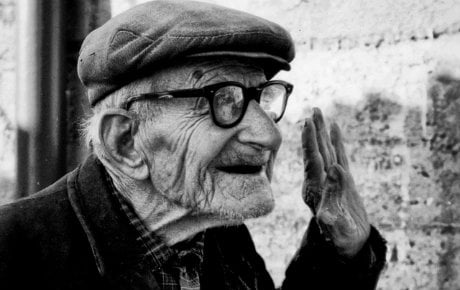 There are now some 19,000 people over the age of 100 – a number experts say is driven by the country's unique diet and way of life.

It's not just centenarians either. The country has the second highest average life expectancy in the world, which the World Health Organization estimates at 83. But Italians are not just outliving their European neighbours, they are outliving them with vim and vigor.

Italy's elderly engage in romantic trysts, ride their scooters around town and cheer on their football teams from the terraces – long past ages when the majority of elderly people in other countries have become infirm.

Examples come from all over the country.

At 116, Emma Moreno is Europe's oldest woman and still lives independently in Verbania, Piedmont. The town of Montemaggiore Belsito, near Palermo, Sicily, counts nine centenarians among its 3,500 residents.

The phenomenon is so stark, it has drawn the attention of the global scientific community, who have studied everything from Italian genes to the Mediterranean diet, in an attempt to find out why the county's pensioners stay evergreen.

One location which has received more attention than any other when it comes to longevity research is Sardinia.

“The island is home to Italy's only 'blue zone', Gianni Pes, the Italian researcher who first coined the phrase in 2000, told The Local. “That is a term used to describe a geographical area home to an exceptionally high number of residents aged 100 or over.”

There are only three other blue zones worldwide – located on the Japanese island of Okinawa, the Nikoya peninsula in Costa Rica, and the Greek island of Ikaria.

Sardinia's blue-zone covers the south-central stretch of the island between the cities of Nuoro and Olgiastra. Here stories of almost superhuman feats of longevity abound.

In the town of Perdasdefogu, near Ogliastra, when Consolata Melis turned 106 in 2013, she and her eight brothers and sisters set a new world record for the longest-living set of siblings after the family racked up an impressive 818 years between them. Melis died in June last year, three months before her 108th birthday.


Consolata Melis and her siblings in 2013. Photo: Guinness World Records 2013

Sardinia's famed longevity is even reflected in the island's traditional dialect greeting 'Akentannos', which literally translates as 'may you live to be 100'.

But how is it that these Sardinians manage to stay free from disease and live longer than might be expected elsewhere?

“About 75 to 80 percent of the phenomenon is down to lifestyle factors, such as diet and family ties” explained Pes.

Although scientists have identified a 'longevity gene', which became concentrated in the isolated mountains of Sardinia due to a historic lack of outsiders, researchers are quick to downplay its importance.

As in much of Italy, the diet in Sardinia is low in meat, based around fresh local produce, and is high in legumes and pulses. In particular, research has shown that the regional red wine and cheese enjoyed daily by the blue zone's inhabitants play an important role in keeping them forever young.

Cheeses made from fresh sheep and goat's milk, like ricotta and the traditional casu ajedu, contain high doses of the lactobacillus bacteria which has been shown to boost digestive, genital and urinary health and are thought to play a key role in maintaining pensioners vitality.

The area's local wine is also thought to be something of an elixir.

The rustic, ruby-red Canonnau, which is knocked back with every lunch and dinner, is high in antioxidant compounds which help slow the aging process.

Due to a swathe of recent publicity, the global demand for these foods has skyrocketed, so much so that a mayor in the blue-zone town of Gavoi is hoping it can strengthen the regional economy.

“If the interest and demand continues, we should be able to move away from industrial projects and base our economy around exporting our traditional food and drink,” mayor Giovanni Cagusi told The Local.

While the prospect of eating more Sardinian food in order to live longer sounds tantalizing, diet is just one of the lifestyle factors thought to drive the phenomenon.

“How we treat our elderly is probably as important as diet in accounting for why we live longer,” Cagusi added. “In our town of 2,700 people everybody knows each other and family ties are very strong.”

Close family bonds mean that the elderly are lovingly looked after and respected by their nearest and dearest, a fact scientists think could add between four and six years onto their lives.

“In Sardinia – and this is true across much of Italy – there is a sort of cult surrounding the elderly,” explained Pes.

“The generous affection and care they get from loved ones has been shown to protect against age-related diseases and slow cognitive degeneration. People who live alone beyond the age of 80 have a much shorter life expectancy than those who have close family ties.”

But Pes warned that blue zones are not fixed. As the forces of globalization arrive to even the remotest corners of rural Italy, the lifestyle changes they bring risk sweeping the clusters of super centenarians away.

“We are already beginning to see the incidences of centenarians fall in Okinawa as modern lifestyle habits arrive. We haven't seen this in Sardinia yet, but we need to remember that blue zones are not static.”

In fact, people are now trying to use Sardinia as a blueprint for creating new blue zones around the world.

Last year, the Texan town of Fort Worth invested $50 million in a 'blue zones' scheme, set up by American journalist Dan Buettner. The programme will see the local council encourage residents to adopt a more 'Sardinian' lifestyle in a bid to boost citizens' health.

In the end, the science of living to 100 is complex and there are no guarantees, but the simple way of life in Sardinia and other parts of rural Italy could hold the key.

At the very least, the science provides us with a perfect excuse to dust off our cheese-boards, crack open a bottle of Cannonau and sit down with our elderly relatives.