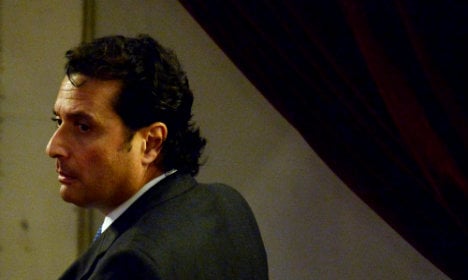 Francesco Schettino is trying to avoid jail for his part in the Costa Concordia disaster. Photo: Alberto Pizzoli/AFP

Schettino was sentenced in February 2015 to 16 years and one month in jail after a judge ruled his recklessness caused the giant Costa Concordia to hit underwater rocks off the Tuscan island of Giglio.

The 55-year-old career seaman, who has not yet begun his sentence, says he has been made the solitary scapegoat for the disaster and will seek to overturn his manslaughter conviction in an appeal which opened Thursday and will run through May at least.

The prosecution is simultaneously appealing last year's sentence, asking Thursday that he go down for 27 years and three months.

“We believe there are serious responsibilities which cannot be ascribed to Schettino and we hope to be able to show that,” lawyer Saverio Senese told journalists outside court.

Senese said there were problems with some of the technical evidence: “we need to look more deeply… to find what really caused the accident.”

During his first, 19-month, trial, Schettino was accused of showing off when he steered the ship too close to the island while entertaining a female friend.

He was convicted of multiple manslaughter, causing a maritime accident and of leaving his boat before all passengers and crew were evacuated.

He was dubbed “Captain Coward” by the international media and his lawyers said he was not in court Thursday because of the press hounding during the first trial.

“He hopes this trial can return to what it should be, a process focused on the search for the truth and not an analysis of his person. He will be in court should the court request his presence,” Senese said.

Schettino was given 10 years for manslaughter, five for causing a disaster that led to the biggest salvage operation in maritime history, and one for abandoning ship.

His lawyers insist the deadly accident was primarily due to a failure of organisation for which the ship's owner Costa Crociere, its Indonesian helmsman and the Italian coastguard should share the blame.

Lawyers for survivors insisted Costa Crociere had got off lightly to date.

“Justice has begun to be served, but there is something important missing from the dock; the company behind Schettino's acts,” lawyer Massimiliano Gabrielli said.

The judges in Schettino's first trial ruled that the company must share civil responsibility for the disaster with the disgraced skipper.

The company was ordered to pay just over seven million euros ($8 million) in compensation to the survivors and the region.

The company sidestepped potential criminal charges in 2013 by accepting partial responsibility and agreeing to pay a one-million-euro fine.

The ex-captain's lawyer said he would have liked the man at the helm to be questioned further “but he cannot be found, he has disappeared into thin air”.

The region of Tuscany and the island of Giglio were awarded €300,000 each – a tiny fraction of what they were seeking for damage done to the sea bed and tourism.

Survivors of the disaster who had rejected Costa's initial compensation offer and become civil parties in the Schettino case were awarded an average of €30,000 euros.

Civil parties lawyer Massimiliano Gabrielli said they would “of course ask for more money, and continue to ask for justice. We also want the question of responsibility to be widened, notably concerning Costa Crociere.”

On top of his prison term, Schettino was banned from public office from life and from working as a ship captain for five years.