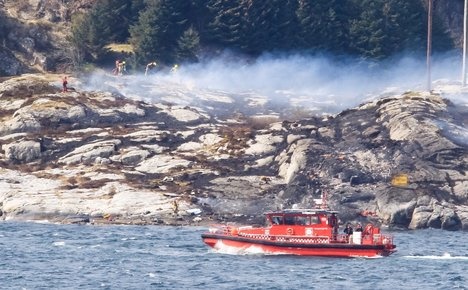 The helicopter, a Super Puma that crashed en route from a North Sea offshore oil platform, was carrying 11 Norwegians, one Briton and one Italian, the Joint Rescue Coordination Centre of Southern Norway (Hovedredningssentralen i Sør-Norge – JRCC) said.

The helicopter was en route to Bergen when it crashed near the island of Turøy.

Police said that the helicopter was carrying 11 passengers and had a two-man crew. After the find of eleven bodies, police and the JRCC said the search would continue for the other two but that there have been no signs of survivors.

A JRCC spokesman said the helicopter was “totally destroyed”.

“Parts of it are on land and parts are in the sea,” John Sjursø told VG, adding that there was a “huge” rescue operation underway.

JRCC spokesman Anders Bang Andersen told AFP that the chopper had been en route to the Bergen airport Flesland when it crashed.

“The helicopter has been located and we are doing everything possible to rescue the occupants,” he said.

“They are searching in the hope of finding survivors. So far we have not seen any sign of survivors,” he added.

Several witnesses described seeing a powerful explosion and people were seen in the sea.

“I head a helicopter coming from the North Sea. It was a strange sound. As I looked up the rotor flew off to the left as the helicopter came down to the right,” eyewitness Jon Sekkingstad told broadcaster NRK.

“The helicopter exploded when it hit the ground. It was frightening,” he added.

The helicopter was returning from the Gullfaks B platform, in one of Norway's biggest offshore oil fields, which is operated by state-owned Statoil.

The helicopter was an EC225, also known as a Super Puma. Broadcaster NRK reported that ten helicopters of the same model in Norway were retired from use in 2012 after two of them were involved in emergency landings.

The accident took place around noon, and more than an hour later boats could be seen criss-crossing across the water as helicopters hovered overhead. Divers were seen at the site, and ambulances were parked on shore.