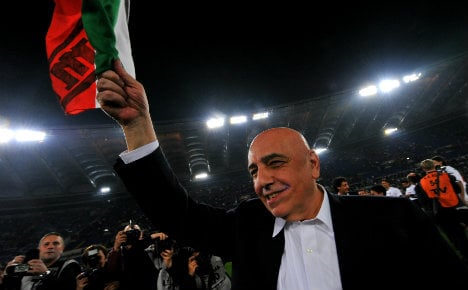 Reports on Thursday claimed Milan owner Silvio Berlusconi could finally go through with plans to sell a majority stake in the club to a Chinese consortium, having seen previous plans come to nothing.

Corriere dello Sport newspaper said an agreement between the two parties – that would see Berlusconi sell 70% of the club and the remaining 30% to be sold off within a year – could be signed at a secret location on Monday.

Galliani, meanwhile, has gone on the defensive after the chief of a minority shareholders' association, the Associazione Piccoli Azionisti (APA), hit out at the club's lack of leadership.

A recent audit revealed more than €89 million in losses for 2015, adding to fears Milan's slow decline in Europe and in Italy will continue.

In recent years a succession of barely-qualified coaches have failed to lift the seven-time European champions out the mire and Milan are currently struggling to even qualify for next season's Europa League.

But Galliani said: “All companies go through negative and positive cycles, the board are doing what they can to overcome this negative trend.”

At a shareholders assembly, Galliani and Berlusconi came under attack from Giuseppe Gatti, the president of the APA.

“The situation is getting worse, worse than we could imagine. I never imagined it would get this far,” he said, underlining the club's failures to improve results despite appointing a series of coaches in recent seasons.

“We can't say that it's the fault of (Clarence) Seedorf, (Filippo) Inzaghi or (Sinisa) Mihajlovic. The responsibility lies with management: Galliani and Berlusconi.

“It's not an act of treason to say the president is also at fault. When Milan were saved from bankruptcy there were still great champions like Paolo Maldini, Franco Baresi and Filippo Galli.

“Where are the champions today?” He added, pointing the finger at Galliani: “I'm waiting for you to resign and for Berlusconi to return to being the honorary President. There needs to be a generational change at Milan.”

Milan host relegation-haunted Frosinone on Sunday when the club's latest coach, Cristian Brocchi, will be looking to avoid dropping points for the third consecutive week, having drawn with minnows Carpi and suffered defeat to basement side Verona last week.