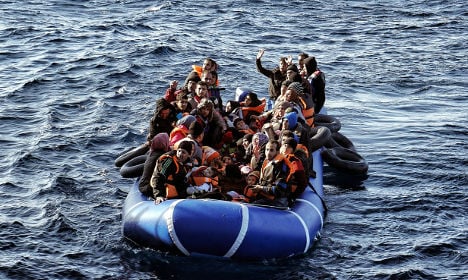 File picture of migrants in a boat. Photo: AFP

The coastguard received a call from a satellite phone late Friday that helped locate the stricken inflatable and called on the merchant ship to make a detour to the area about four miles (seven kilometres) off the Libyan coast near Sabratha.

The vessel was able to pick up 26 people from the boat that was deflating and taking on water and searched in vain for others.

Similar inflatable boats can carry as many as 100 people but the coastguard was not able to confirm the number on board.

The nationalities of the migrants, who were transferred to a coastguard vessel and taken to the Italian island of Lampedusa, were not immediately known.

More than 350,000 people fleeing conflict and poverty have reached Italy on boats from Libya since the start of 2014, as Europe battles its biggest migration crisis since World War II.