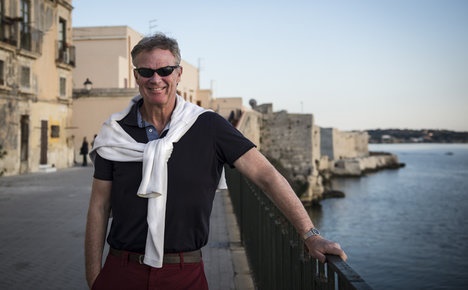 So where am I now?

The perspective comes from living the last two years and three months in Italy. It’s a country that the overworked and underloved American dreams about while slaving away at a computer in hour No. 12 or dragging child No. 3 to soccer practice.

This country leaves a taste in your mouth that lasts forever, whether it’s a perfectly seasoned pasta amatriciana or the kiss of your first Italian woman. You could spend a lifetime chasing that same taste. You can only find it here. I found it here, in Rome, after an 11-year absence. As I settle in with my A.S. Roma bathrobe and cappuccino maker for the last third of my life, I recently cocooned myself in self reflection. The experiences I’ve had cover 157 blogs. But one moves to Italy for more than a glass of Barolo on a cobblestone piazza or walking past masterpiece statues on your way to the subway.

I asked myself one question: how has Italy changed me?

In some ways it hasn’t. My modus operandi has been I’m very passionate about the things I love and the things I hate. I still hate. I still hate some former bosses. I hate the Republican Party. I tried to change. Meditation I learned last year in India did nothing but cause cramps from sitting cross-legged. Frankly, I don’t know if I want to change. It gives me an edge that fuels me. Forgiveness is for cowards.

However, I love more than I ever have. Italy teaches that to you. It is a society of nurturers who open their arms up to strangers with a bottle of wine in one hand and a plate of carbonara in the other. In Italy, I never felt like a stranger in a strange land.

With that in my mind, here are the answers to the question above. Within six months after retiring here, I had more friends in Rome than I had in 23 years in Denver. Rome has a reputation of being the cold heart of Italy. It’s where more than 2,000 years of war, corruption, poleaxed political systems, inflation and recessions have turned Romans into mere survivors. They are out for themselves and too busy trying to make ends meet to make room for someone else.

It’s the biggest cultural lie this side of Democrats are communists.

Italians are curious people. They are interested in others, particularly outsiders. They are rightfully proud of their country — the good parts of their country — and love to share it. Some Italians I’ve met in cafés asked me more questions about my life in two minutes than my two sisters have in two years.

Life for Italians, particularly in Rome, is difficult. Costs are high; salaries are low. Corruption is constant. I can sense they aren’t as happy as they were when I lived here the first time from 2001 to 2003. My Italian friends tell me about the stress they experience at work. But when the work day is done, there are friends to be seen, wine to be drunk, food to be eaten.

Life is good. Life must be shared. Granted, my stress level as a retired expat in Rome isn’t high. Negotiating my apartment contracts and the quality of foam in my cappuccino rate up there on my blood pressure chart. But when I feel down from an inevitable mood swing, I do what Romans do.

I go to a piazza.

When the Romans laid out this city 2,000 years ago, they placed big and small squares everywhere. They were connected to little alleys that spoked out to the countryside. Before the invention of cars, these roads were just big enough for horses and carts. Well, these squares remain safe havens from noise, automobiles, Vespas and construction. They are places where I can sit and read the newspaper, have a cappuccino or watch a father and son kick a football.

After an hour of quiet solitude in a peaceful pocket of a chaotic city, I’m not so down anymore.

Italians are the nicest people on earth I qualify as a good judge. I’ve been to 99 countries. And for years I gave this crown to the Swedes. Whoever met a rude Swede? Then I leaned toward the Cambodians, a people so gentle trishaw drivers turned down tips. I even gave it briefly to the Sri Lankans, whom I met during a two-week trip last year.

But after two years here on top of the 16 months of my first stint, the Italians sit front and centre. This isn’t just Rome. This isn’t just my friends. I’ve been to 17 of Italy’s 20 regions, from Sicily to Alto Adige. I can count on a few fingers how many rude people I’ve met. I’m not talking rude people in general. I’m talking minor rude incidents, one-off encounters that I seemingly had every few hours living in Seattle. A waitress in Milan once discounted my plea for service with a back wave of her hand. Some women have criticized my Italian. That’s about it.

Drivers, belying their reputation as the world’s biggest assassins behind a wheel, stop for me. Packs of rowdy teenagers say, “Scusa,” when they squeeze by me on a crowded street or subway. Merchants in my market round down prices. Waiters pass out free biscotti. My landlady is even nice to me.

I’m a real cynical person. I have been called hypersensitive. Little acts of rudeness can set me off like a dog getting his tail stomped. Yet I struggle to remember an instance — however small — when an Italian ever really upset me. That’s astonishing. That’s unheard of.

Football is my favourite sport I hope Republicans read this. They’ll think I’m a communist.

Yes, after 40 years of covering sports in the US, when my life revolved around 162 baseball games and each of 12 college football games were so critical to civilization as we know it, I have shed my viewing habits. I haven’t watched a baseball game since I left — not even so much as a pop-up. College basketball has become a one-month sport and the NBA, with its redundant seven-game playoff series, is way too predictable.

I love college basketball’s March Madness but not enough to stay up until 3am to watch any of the last three championships.

Instead, football has filled a void. I became hooked the first time I went to Stadio Olimpico in 2002 and found tears welling in my eyes as I joined arms with strangers in Curva Nord and sang “Grazie, Roma” after an A.S. Roma victory. It has grown ever since. The first website I turn to in the morning is ESPN FC. I tweet incessantly while watching Roma matches in bars and my neighbourhood Roma Club. I’m often in my local bar, On the Rocks, watching Champions League matches. I check out the standings in Belgium, for goodness sake. I go up the hill to watch Trastevere FC, a team in Italy’s fourth division!

They call it “The Beautiful Game” for a reason. From a guy who has written about most sports ever invented, I am always astonished to see the things athletes can do without using their hands. It could be Cristiano Ronaldo scoring three goals to save Real Madrid in the Champions League or Bologna goalkeeper Antonio Mirante blocking a seemingly impossible shot to the far corner against Roma, or the bicycle kick Lorenzo Pace of little Cynthia scored against Trastevere. I always turn away from a football game knowing I’ve seen a skill I’ve never seen before.

Football has also given me a new mantra that makes me part of the fabric of my Testaccio neighbourhood, the area where my A.S. Roma was born in a drab corner office building in 1927.

I’m not fluent. That’s a few years off. It’s the stick that is constantly in front of my nose, like a chocolate cornetto that I can’t quite taste. I still struggle with comprehension, and my over-the-top American accent makes my Italian sound somewhat German. I tell friends that Italian is a very romantic language — except when I speak it.

But I am conversational and can converse with everyone from fishermen in Sicily to waitresses in Turin. I started a part-time job with a translation service. Speaking Italian is massively important here. I know Americans who have been here for two decades and still can’t speak Italian beyond ordering off a menu. You can live in Rome without speaking Italian. However, you’ll live in a bubble. The only people some expats associate with are other expats and Italians fluent in English. That number can practically fit in a Fiat. They’re isolating themselves from about 95 percent of the Italian population.

These people have a lot to say. I want to hear it.

I hate Republicans even more

Watching the American political scene from Italy is like looking down at the doomed getting whipped by demons in Dante’s Third Circle of Hell. Donald Trump is openly campaigning on a platform of racism and hatred. He’s fanning the flames of an already racist nation and lauded by a Fox News network that’s as objective as State Radio Pyongyang. It isn’t that Trump wants to build an impossible wall on the Mexican border or keep every Muslim from entering the country. Every country, every political party, has this type.

It’s that tens of millions of my countrymen think this guy should lead the free world.

I have yet to meet a Roman who thinks Trump is anything but a cartoon character, believed the Iraqi War was a good idea or even voted for Silvio Berlusconi, Trump’s media-driven alter ego who was a danger to his own Italian people but not to the world.

The comforting thing about living in Rome is I can walk into any cafe or bar and know I won’t get in a political argument. If I went back to the U.S., I’d be dead or in jail within 24 hours.

So after two-plus years, I can say I’m a changed man. Check back in another two. Maybe the honeymoon will end and I’ll long for a cheeseburger and long fly ball to center field. But right now I’m happier than I’ve ever been, in the land where the sun always shines and the wine always flows.

To read more about John and his life in Italy, visit his blog, Dog-Eared Passport.