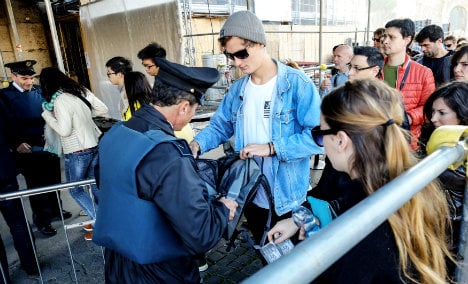 Four units, each boasting one Chinese copper and an Italian flatfoot, will be posted to tourist hot spots such as the ancient Colosseum in Rome or Milan's Gothic cathedral to help deter pickpockets and counsel those who have come a cropper.

Reports last week suggested that the move was aimed at curtailing the influence of Asian gangs in Italy. However, at a press conference in Rome on Monday, authorities announced the scheme wanted to reduce crimes against some of the three million Chinese who visit Italy each year.

The patrolmen will be on site from Tuesday until May 13th.

The next two weeks is expected to be the peak period in Italy for shopping-happy Chinese visitors, known for spending their cash on Italian goods.

“If the experiment is successful, we will expand it to other cities in Italy,” said Interior Minister Angelino Alfano, adding that Italian policemen would soon be heading to Beijing and Shanghai to carry out the same sort of patrols there.