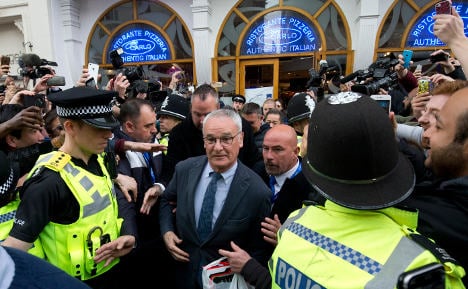 Leicester City's manager Claudio Ranieri (C) is mobbed by fans as he leaves an Italian restaurant after having lunch with the team on Tuesday. Justin Tallis/AFP

“I'm sorry about how it finished for him at Roma: we've always been a big Roma-supporting family,” Renata Ranieri told La Repubblica newspaper on Wednesday.

“He took over (at Roma) when the season had already started. He didn't earn the respect of his own city… and I'm disappointed it finished like that for him.

“But now, he's the king of England and he's getting compliments from all around the world.”

Ranieri went to Rome to have lunch with his elderly mother on the day Leicester clinched their historic Premier League title when Tottenham failed to beat his former club Chelsea on Monday.

It was only two hours, but it gave her 64-year-old son “time to relax” and reflect on an unforgettable season at the tail end of what has been a storied, and not always successful, career for the coach known as the “Tinkerman”.

Ranieri's achievements with Leicester have resonated around the world, especially in his native Italy.

Sacked by Juventus before the end of the season in 2009, Ranieri was appointed Roma coach months later after Luciano Spalletti quit after two opening defeats.

It looked a dream appointment for the man who grew up supporting Roma while working as a butcher's boy before embarking on a modest playing career.

But despite Roma going 24 games unbeaten, Ranieri's popularity plummeted when they lost the title and the Italian Cup final to Jose Mourinho's treble-winning Inter Milan.

After a 1-0 Cup final defeat to Inter, Mourinho mocked Ranieri for showing his players the 'Gladiator' film in a bid to inspire them to victory.

Defeat to Inter in the Italian Super Cup final the following season preceded a negative series of results and Ranieri quit Roma in February 2011.

Five years after the bittersweet experience, Ranieri's coaching acumen is now being applauded around the world.

“I started crying at the end of game,” his mother said of Chelsea's 2-2 draw with Tottenham.

Although Ranieri was scheduled to be flying while Monday's Premier League game was underway, the Italian reportedly watched the game live after

“I only heard from Claudio later on because I was busy taking calls from grandsons and cousins. He was very happy, like everyone was: now we can all relax,” added Renata.

Defying odds of 5,000-1 to prevail ahead of England's glamour clubs in a way that turned Leicester's unheralded players into household names, even Ranieri's mother had doubts.

“I didn't expect him to win, but the players he had under him are all good lads. It wasn't a little team he was in charge of, but they trained like true professionals,” she said.

Considered a relative failure in Italy after being sacked by Inter and Juventus, Ranieri's biggest achievement in his homeland was steering Fiorentina to the Serie B championship in 1994 and the Italian Cup and Super Cup two years later.

His mother added: “In England, he is in his element, they treat him perfectly and allowed him to get back on his feet. And I want to say thanks to them all.”