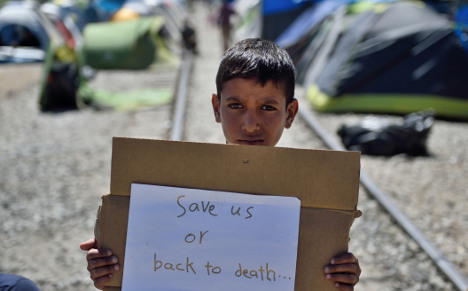 Prime Minister Matteo Renzi, who fears Italy becoming the new migrant frontline after the closure of the Balkan route, will host the first day of talks, followed by Pope Francis on Friday.

As the EU braces for more turbulence notably with next month's “Brexit” referendum in Britain as well as renewed Greek debt talks, Italy is keen to keep the focus on forging a joint plan over migrants.

From 6.30pm (4.30pm GMT) they will hold a conference on the future of the EU, which will take place in the same room in the Capitole where the 1957 Rome Treaty was signed, founding the body that developed into today's 28-nation EU.

With over 28,500 migrants arrived since January 1st, Italy has once again become the principal entry via the Mediterranean, after the controversial EU-Turkey deal and the closure of the Balkan route north.

Rome fears that, unlike previously, Italy will be left hosting masses of new arrivals if, for example, Austria mounts stricter controls at the Brenner pass linking Italy through the Alps to northern Europe.

Threats to the Schengen Treaty on free movement sparked by the migrant crisis were described by Italian Finance Minister Pier Carlo Padoan as “more dangerous than the euro crisis a few years ago”.

UN refugee agency spokeswoman in Italy, Carlotta Sami, on Wednesday welcomed the “movement from an emergency approach to a structured approach, making plans and reflecting on (the) integration” of migrants into countries where they arrive.

After Renzi on Thursday, Pope Francis will meet Merkel and the three EU institution leaders on Friday, before making a speech as he is given the EU's Charlemagne prize, which each year honours “an exceptional contribution to European unification.”

The Pope, who usually refuses prizes, explained in February that he accepted this one in order to appeal for a “refounding” of the European bloc. In November 2014 he called at the European Parliament for Europe to become a “reference point for humanity.”