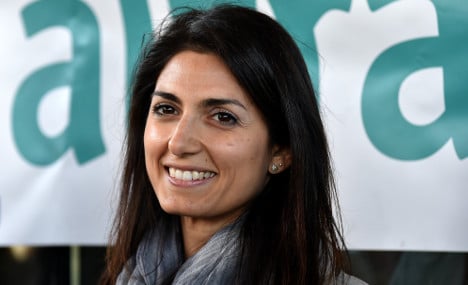 A glamorous 37-year-old lawyer, Virginia Raggi of the populist Five Star Movement (M5S), is leading polls to become mayor of the capital, which has been run by a special commissioner since last November after the previous centre-left mayor resigned amid an expenses scandal.

For months the Eternal City has been gripped by the so-called Mafia Capitale scandal in which 46 people are accused of operating a crime group that used extortion, fraud and theft to divert millions of euros destined for public funds into their own pockets.

Whoever wins next month's polls will have their work cut out to restore the image of a city tainted by chronic financial and infrastructure problems.

“We are in an emergency situation in which we need urgent responses,” mayoral candidate, Stefano Fassina, the leader of the left-wing Sinistra Italiana and former member of Prime Minister Matteo Renzi's centre-left Democratic Party (PD), said on Tuesday evening.

He was speaking in the working-class district of Testaccio, where a group of bloggers tired of the city's tatty state invited Fassina to go head-to-head with rivals, including the M5S's Raggi and a candidate backed by the PD – Roberto Giacchetti, a journalist and vice president of the lower house of parliament.

Others who were invited but declined to join the debate included former far-right minister Giorgia Meloni and centre-right businessman Alfio Marchini.

Cars double-parked, potholes in pavements, overflowing rubbish, inefficient bus and metro systems, rampant absenteeism in public offices: the list of woes faced daily by Romans is a long one.

Even if almost everyone has their own idea about solutions, all share the same view: it will not be easy to reform a system which is so complex.

Weighed down by some €12 billion in debt, the city struggles every year to balance its budget, while employing nearly 60,000 staff including 25,000 municipal civil servants.

Faced with a challenge of this scale, Rome's voters are so far backing M5S's Raggi, a photogenic brunette and mother of a young son.

Raggi is surfing on the gripes of Romans tired after years of watching the Italian capital go from bad to worse.

Backed by the M5S – founded by comedian and actor Beppe Grillo as an anti-elite, anti-party, anti-corruption force – Raggi also benefits from the political “virginity” of the movement, which has not yet really wielded power except at a local level.

The second round, on June 19th, is expected to pit two women against each other: Raggi and Meloni, a 39-year-old blonde who is seven months pregnant and is supported by the anti-euro populist Northern League of Matteo Salvini.

The traditional right is trailing: the candidate initially chosen by former premier Silvio Berlusconi, Guido Bertolaso, had to withdraw because of lack of support.

And Marchini, who is at the same time representing a citizens' list while receiving the support of Berlusconi's Forza Italia, repeated Wednesday in an interview with the Sky TG24 TV channel that he was, above all, “independent”.

Berlusconi sparked fury in March by claiming that being mayor of Rome was “no job for a mother” while backing a male candidate who advised a pregnant rival to stick to breastfeeding.

“A mother cannot dedicate herself to a terrible job and running Rome today is terrible job which will require 14 hours a day in the office,” Berlusconi said.

Raggi meanwhile said in April that Rome is far from being able to host the Olympics, two months after the Eternal City was short-listed for the 2024 Games.

Her comments are likely to infuriate Renzi, who has backed the bid as a symbol of Italy reviving under his leadership.