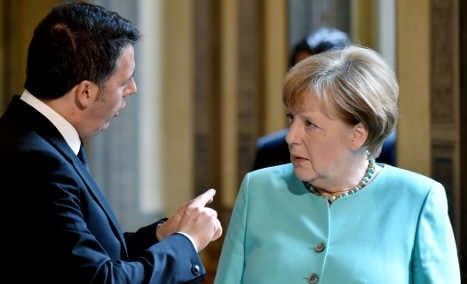 As Italian Prime Minister Matteo Renzi kicked off two days of talks in Rome with Merkel and senior EU officials, the German leader said Europe must defend its borders “from the Mediterranean to the North Pole” or suffer the political consequences.

Support for far-right and anti-immigrant parties is on the rise in several countries on the continent which saw more than a million people arrive on its shores last year.

In Austria, Norbert Hofer of the far-right Freedom Party is expected to win a presidential run-off on May 22nd after romping to victory in the first round on an anti-immigration platform.

Merkel told a press conference with Renzi that Europe's cherished freedom of movement is at threat, with ramped-up border controls in response to the crisis raising questions over whether the passport-free Schengen zone can survive.

With over 28,500 migrants arriving since January 1st, Italy has once again become the principal entry point for migrants arriving in Europe, following a controversial EU-Turkey deal and the closure of the Balkan route up from Greece.

In previous years, many migrants landing in Italy have headed on to other countries – but with Austria planning to reinstate border controls at the Brenner pass in the Alps, a key transport corridor, Rome fears it could be stuck hosting masses of new arrivals.

Renzi lashed out at Austria on Thursday, describing Vienna's position as “anachronistic”.

“This is the wrong attitude even if there is a migrant crisis,” he said.

Italy is pushing for Nato naval patrols off Libya in time for the summer people-smuggling season, and a deal with Libya on the model just concluded with Turkey.

On Thursday, Renzi stressed the need for “a strategy for Africa” to stem the influx from there.

He wants EU aid for African countries that have seen large numbers of migrants set off, in a bid to lessen the poverty that drives many of them to leave home.

“The important thing is to invest in Africa,” Renzi said.

But he added that Germany and Italy were in disagreement over how to fund the plan, with Germany against using eurobonds to offer finance to African countries.

Renzi was hosting European Commission leader Jean-Claude Juncker, EU President Donald Tusk and European Parliament chief Martin Schulz for more talks on Thursday, ahead of a conference on the future of the EU at 4.30pm GMT.

On Friday, Pope Francis — who has blasted Western society for its indifference to refugees – will meet with the European leaders.

Merkel, whose country took in more than a million asylum-seekers last year, on Thursday insisted on the need to “respect the human dignity” of immigrants and to “share the burden” of the influx.

Bulgaria's Prime Minister Boyko Borisov, in an interview with AFP, took a stance unusual among Central and Eastern European leaders in agreeing with her.

In Austria, far-right presidential candidate Hofer was meanwhile attempting to woo more mainstream voters by saying he believed it was possible to integrate migrants.

“I think that if we do everything we can to make sure the people who are already in Austria integrate themselves, it's still possible,” he told APA news agency.