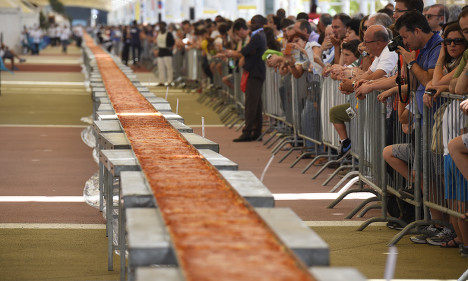 The current record is held by a 1595 metre pizza built in Milan, pictured above. Photo: AFP Photo / Olivier Morin

If successful, the attempt will smash the current record of 1595 metres, held by a pizza baked during Milan's food-themed Expo last year.

“It's absolutely a point of pride for our city, which is the home of pizza,” Alessandro Marinacci from Naples' Pizza Village, which is organizing the attempt alongside local flour producer, Caputo, told The Local.

Italy recently submitted a dossier to Unesco in a bid to get its traditional Neapolitan pizza listed on the Intangible Cultural Heritage list.

The iconic cheese and tomato pizza was first baked in the city for the Bourbon Queen Regina Margherita by local chef, Rafaelle Esposito, in 1889.

“What's more, unlike Milan's Expo pizza, our effort will be cooked in the traditional Neapolitan style,” Marinacci told The Local.

“For the attempt we have custom designed five motorized wood-burning stoves on wheels.”

On Sunday, May 15th, a team of hundreds of pizza chefs from all over the globe will work for around 11 hours to bake the 40cm wide, 2km-long pizza along the city's seafront.

Over the course of the day they will use two tonnes of flour, two tonnes of mozzarella, 1,500kg of tomato sauce, 200 litres of oil and 30kg of fresh basil.

Baking giant pizzas is something of a national pastime in Italy, where two pizza-baking records were broken last year.

Last June, a 1229 metre-long pizza was rustled up in the streets of Rende, Calabria. But that record fell just one week later, when chefs at Milan's Expo made their 1595-metre whopper, which holds the record, but probably not for much longer.