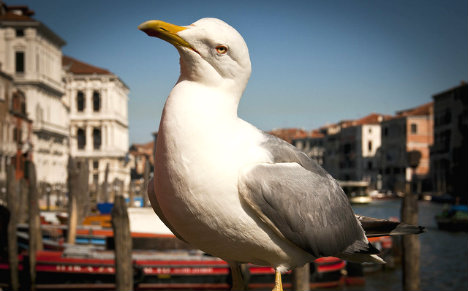 A flock of around 70 brazen birds patrol the square each day, routinely swooping down to snatch food out of the hands of tourists or perform raids at the tables of bars and restaurants which line the square.

They have even begun attacking waiters as they carry food to tables before making off with whatever they can cram in their beaks.

At café Florian, an 18th century coffee house which lies under the shadow of the square's 15th century bell tower, waiters have resorted to placing plastic and cardboard covers over food before transporting it in a bid to stave off attacks.

“A seagull attack is pretty scary – those the birds are larger than people think,” Florian's director Renato Constatini told The Local. “When they attack someone carrying a tray it's dangerous too, because things fall and break,”

“We are trying to protect ourselves as best we can but the birds no longer fear humans.”

The situation has got so bad that the Saint Mark's Association which runs the square has even approached an Italian company specializing in natural perfumes to develop a 'seagull repellent' that can be diffused throughout the square to keep the birds at bay.

“Basically our system works by releasing an aerosol of essential oils into the air. The oils are not harmful to humans but birds don't like them,” explained Marilena Cascone, Commercial Director of Seneca Rouxair.

“Not only will it keep the birds out of the piazza, it should also reduce their desire to reproduce which will mean the number of seagulls and pigeons will fall.”

“We have performed a preliminary study and are working on a demo at the moment,” Cascone added. Explaining that the solution was cheaper than hiring a falconer to deter the birds.

In 2008, when the pigeon population in the city's historic centre hit 140,000, the council simply passed a law making it illegal to feed the birds in a bid to curb their spread. But stopping the seagulls is proving trickier.

Nobody is feeding them, instead their expert scavenging skills and lack of fear mean they are managing to steal the food they need to flourish.

The council first announced plans to tackle the gull problem last year but as of yet they have been able to find a solution that works.

Over the summer they tried playing recordings of falcons calls to scare off the gulls, and when that proved ineffective they began flying a remote control falcon-shaped balloon around the square, to no avail.