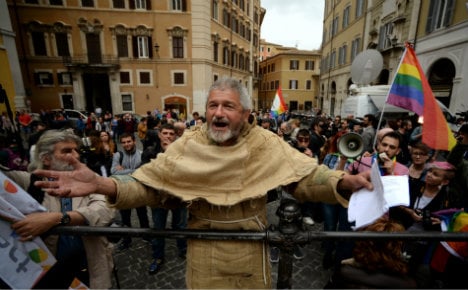 A man dressed as a friar demonstrates against same-sex civil unions outside the Italian Parliament. Photo: Filippo Monteforte/AFP

Lawmakers from Silvio Berlusconi's Forza Italia, the far-right Northern League and various other factions told a press conference they would begin work to raise the 500,000 signatures required to force a referendum as soon as the new law is signed by President Sergio Mattarella.

For a referendum to happen, the signatures have to be verified by the Court of Cassation and the Constitutional Court must then approve the validity of the proposed ballot question.

If these obstacles are overcome, opponents of the law would then have to win a referendum in which at least 50 percent plus one of eligible voters cast a vote. If the quorum is not met, the referendum result is invalid.

Monica Cirinna, the Democratic Party senator who guided the legislation through parliament in the teeth of fierce opposition led by the Catholic Church, said she would welcome a popular vote.

“Italian citizens have never voted for discrimination,” she said. “They have always confirmed major civil rights advances which have already happened.”

Carlo Giovanardi, a member of the Italian senate who was one of the most prominent opponents of the unions bill, said the referendum move was a protest at the way the legislation was pushed through parliament, not motivated by homophobia.

“We are not against the recognition of rights but we are resorting to a referendum because (Prime Minister Matteo) Renzi prevented us from amending and debating the law,” he said.

To short-circuit blocking or delaying amendments Renzi ordered confidence votes on his government's stance on the bill in both the Senate and the lower house Chamber of Deputies, prompting accusations of authoritarianism.

A referendum does not currently look as if it would have much chance of succeeding. A vote to overturn the law would also be legally complicated as the first civil unions are expected to be contracted in the autumn, before any referendum can be organised.

Opponents of the law are also planning legal challenges on two fronts: one that it is anti-constitutional because the proposed civil unions are too close to marriage, and another on the grounds that the financing of the law's application has not been properly provided for.

Opinion polls suggest a majority of Italians support the legislation adopted on Wednesday, which introduces civil unions for the first time but denies same sex couples equal adoption rights to their heterosexual counterparts.

An editorial in Avvenire, the newspaper of the Italian conference of bishops, said Thursday a referendum was not the best way to pursue the fight for Catholic notions of the family and suggested the Church would also not back mayors who refuse to implement the law.

Italy was the last major Western country to introduce legal recognition of gay relationships and the law's provisions do not go as far as the gay marriage legislation enacted in comparable Western European countries such as Britain, France or Spain.

Boris Dittrich, who works on lesbian, gay, bisexual and transgender issues for Human Rights Watch, said the Italian law was a milestone in terms of legal recognition for same sex-couples in Italy.

“But restrictive adoption provisions for same-sex couples deny some children the legal protection and security they deserve,” she said.