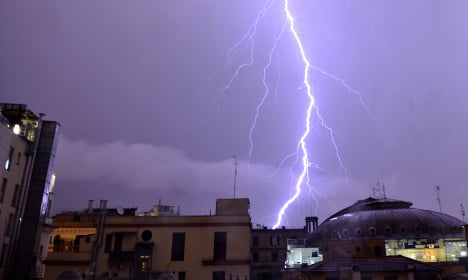 Severe storms are expected to stike much of Italy over the next couple of days. File photo: Marie-Laure Messana/AFP

After a lengthy period of pleasant summery weather, northern Italy is bracing itself for a change as incoming cyclone Poppea prepares to batter many northern regions with strong winds and heavy rain.

Italy's Civil Protection unit has issued yellow weather alerts to most northern regions, meaning residents should exercise caution on the roads, while in some locations the higher orange or red alerts have been issued.

You can view the current alert for your area here.

Areas of Piedmont, Lombardy, Veneto, Friuli Venezia Giulia, Emilia-Romagna, Tuscany, and Umbria are all set to be affected, while warnings have also been issued for the southern regions of Lazio, Molise and Sicily.

The low air pressure brought by the cyclone has seen temperatures plummet by up to ten degrees Celsius nationwide, bringing an abrupt end to the spring sunshine Italy was enjoying..

The cyclone is expected to last until Sunday.

So what does this mean if you live in one of the affected areas?

Expect frequent rainstorms, alternating with dry, even sunny phases. The outlook from the south is drier, but storm-strength winds are forecast

In late February, five people were killed and many more rescued from perilous circumstances when storms and heavy rainfall battered much of the Italian peninsular as cyclone Golia arrived.