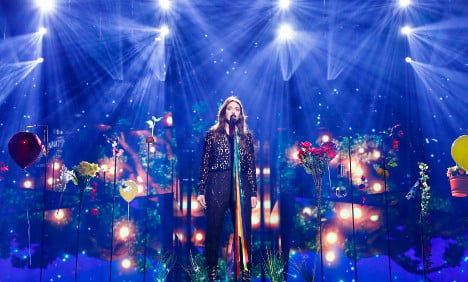 Francesca Michielin, Italy's Eurovision entry, in rehearsal. How much do you know about her. Photo: Andres Putting (EBU)

21-year-old Francesca Michielin will be representing Italy this year – and you may well have heard her music before.

She won Italian X Factor at just 16, and her single Distratto went double platinum. Since then, her albums Riflessi di me and di20 have been bestsellers in Italy, topping the iTunes charts.

Francesca studied piano and then electric bass as a child, and began singing in a gospel choir aged 14. Her brother introduced her to rock music, and after hearing Adele's album 19, Francesca began to compose her own songs.

She has said that performing at Eurovision has been her dream since the age of six, because “music is the most powerful and effective way to communicate.”

What will she sing?

No Degree of Separation is the title of her song, which will be performed with verses in Italian, and a chorus in English.

Describing her song, Francesca said she hoped to communicate “a seed of hope and faith in a possible world with no war, even if momentarily it is troubled”. She also explained her choice to sing in English (the original version is entirely Italian) so that everyone could understand this message.

How will it look?

Francesca will wear floral dungarees to perform, with props including flowers, fruits, balloons and diamonds on a grass-covered platform. She will be accompanied by two off-stage backing singers.

Asked to describe her performance in three words, she said: “Green, tree and… no parrots or animals.”

Here's a sneak peek of how that's going to look.

She'll definitely be in the final

As one of Eurovision's 'Big Five' – the countries that give the most financial backing to the song festival, Italy automatically secures a spot in the final, along with France, Spain, Germany and the UK.

But Francesca herself feels that this system is a bit odd, telling her Twitter followers: “It's a strange thing, because if we are all the same, why do we [the Big Five] have to go directly to the final?”

…But she almost didn't make it

Francesca came second in the Big Artists competition at Sanremo Music Festival, a huge contest which is more famous in Italy than Eurovision. The victor usually gets the option to represent Italy at Eurovision, but 2016's winner, four-piece band Stadio, turned down the opportunity, and so Francesca was given the honour instead.

She's enjoying being in Stockholm

Francesca performed in several European cities including Berlin and Copenhagen before arriving in Stockholm for Eurovision, and she's loving the experience. She described Copenhagen as “paradise on Earth” and especially enjoyed the Oresund Bridge connecting it with Malmo.

Since arriving in the capital, she's been to Mamma Mia! The Party, and has tried out some traditional Swedish cuisine. In fact, she says her favourite thing about Sweden are the meatballs with jam.

And here she is with French contestant Amir, trying to say 'I love meatballs' in Swedish'.

She's a big fan of her rivals

Francesca isn't the competitive type and has described Eurovision as “a beautiful experience because there is a lot of sharing, a very beautiful atmosphere.”

“You feel really European when you are at Eurovision,” she added.

Here she is with fellow fans of Swedish entrant Frans.

Among Frans Fans ('cause I'm too)! #ComeTogether #Eurovision #ifiweresorry

As well as Frans, Francesca has said she is a big fan of Cyprus's entry.

A self-confessed Eurovision superfan, Francesca hasn't only been practising her own song, but everyone else's too.

Here she is singing France's entry, J'ai cherche, which will be performed by Amir – who Francesca has described as “bellissimo”. He performs a few lines of her song too.

And here's her take on the German entry, Ghost, which will be performed by Jamie Lee.

If you're looking for even more Francesca trivia, her favourite subject at school wasn't Music, but Latin and Ancient Greek, and she loves dinosaurs. In her spare time, she likes watching films (her favourite is The Shining), eating and learning new musical instruments. And her favourite Harry Potter character is Ron Weasley, “because he's a bit of a nerd”.

And although Francesca is loving the Eurovision experience, she is still missing some things about Italy. Specifically, her pet dog, and pizza.