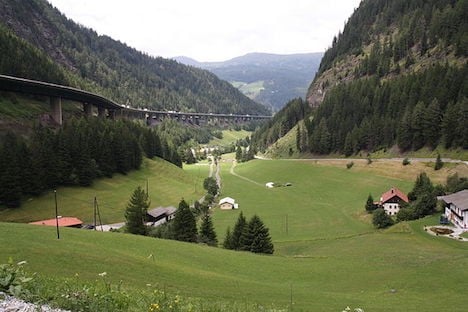 Vienna had threatened to re-impose controls on the Brenner Pass in the Alps as part of a string of anti-migrant measures if Italy failed to reduce the number of new arrivals heading to Austria.

“The number of illegal migrants has dropped to almost zero in the past weeks,” Interior Minister Wolfgang Sobotka told a joint press conference with his Italian counterpart Angelino Alfano at the pass, a key north-south route.

“That's why it is not necessary to carry out border controls at the Brenner pass for now,” Sobotka said.

He added that reinforced train controls by Italian, Austrian and German officials had helped slow the influx to a trickle.

“The number of illegal migrants has dropped to almost zero in the past weeks,” Interior Minister Wolfgang Sobotka told a joint press conference with his Italian counterpart Angelino Alfano at the pass, a key north-south route.

Alfano said he was “happy” that Austria had recognised Italian efforts to address the issue.

He also said that 110 extra guards would patrol the Alpine crossing point between the two countries.

The historic Alpine route is a major European transport corridor, with some 5,550 lorries passing through on a daily basis — a crucial lifeline for Italy's exports to northern Europe that is already prone to delays even without border checks.

But Vienna has been concerned that it could also become a new route for migrants and refugees following the closure of the Balkan trail leading from Greece towards western and northern Europe.

More than 28,500 people have already landed on Italy's shores so far this year after setting off from Libya.

The move, coupled with the government's threat to carry out tough checks, caused tensions with Rome and sparked violent protests at the pass in recent weeks.

It also drew strong criticism from the EU's executive body, the European Commission, with its president Jean-Claude Juncker calling the proposal a “political catastrophe” for Europe last week.

Friday's announcement comes a day after the EU approved a six-month extension of existing border controls in the passport-free Schengen Zone, brought in last year by several countries including Austria to stem the flow.

More than a million people fleeing war, persecution and poverty in the Middle East and elsewhere arrived in Europe last year, triggering the continent's worst migration crisis since the end of World War II.

Austria received around 90,000 asylum applications in 2015, the second-highest number on a per-capita basis in the EU after Sweden.

The influx has boosted support for the anti-immigration Freedom Party — which is now leading the polls ahead of a scheduled 2018 general election — and become a major headache for the ruling centrist coalition, with Chancellor Werner Faymann resigning on Monday.