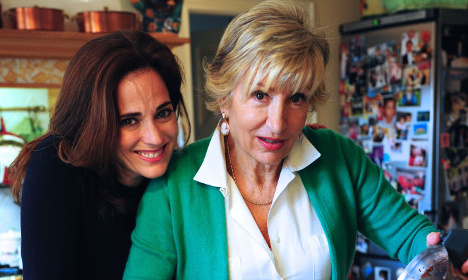 Katherine Wilson, one of the three expats, cooking with her Italian mother-in-law. Photo: Tara Crossley

Katherine Wilson has published a book, Only in Naples: Lessons in food and famiglia from my Italian mother-in-law, about how Italian cooking changed her life.

“I came to Italy after college to do a three-month internship at the US Consulate in Naples. It was supposed to be a brief trip before starting my real life. But when it came time for me to leave, I realized that I had fallen in love with a city and a culture, as well as with a man and his mother.

The food in Italy seduces you. It’s not a rational appreciation, it’s what Italians would call carnale: visceral, impossible to describe or understand. The preparation and consumption of food is at the center of life in Naples: it’s where relationships are played out, love is expressed, conflict is negotiated. You can’t fully appreciate and participate in Neapolitan culture if you don’t get inside the recipes.

Italian food is made up of fresh, simple, delicious ingredients that are full of natural flavour, used in recipes that have been handed down for generations – they’ve stood the test of time. My favorite is Neapolitan ragù. When it’s been simmering for 12 hours (or even the “rushed” version that’s cooked for six or eight!) and is dense and deep red, served with rigatoni and fresh parmesan. You can taste it when the love is missing, as my mother-in-law reminds me. I got the idea to write the book about ten years ago. A lot of Italians asked me why I would leave the greatest country on Earth to move to Naples, while Americans wondered what it was like to be married to a Southern Italian man, and to have to deal with his mother. I wanted to share how I was transformed by this city and this family, and how I was freed of many things that had kept me from enjoying my life in the US. I often feel like I have two identities, and writing the book was a way to stitch together those two identities.

When I lived in the US, I thought my appetites were something to be managed and controlled, suppressed. In Italy I learned that they’re something to be celebrated. I hope that people finish the book full of hunger. For food, for love… and maybe even for a trip to Naples!”

“My interest in Italian food began when I saw what my Italian neighbours were growing and eating. Eating fresh pasta and the most delicate, tasty prosciutto crudo from our butchers who personally oversees the animals he uses in his products made me realize what real food is. There was nothing processed or out of season.

We moved to Italy in 2004. My husband and I had two small children and I was pregnant with the third. We craved more space, land to grow vegetables, a more balanced work-life ratio, and an adventure. Le Marche is considered to be the 'real' Italy; the villages, the restaurants and the way of life is arranged for the local people not particularly for tourists.

Italian Food and Flavours is an initiative started by a group of English friends and neighbours in collaboration with a local Le Marche chef and restaurant owner, and we offer cooking holidays in the rural setting. The team all have different strengths, whether cooking, languages or web design.

I hope the guests take away a passion for real food, made from scratch with local, seasonal ingredients. I hope they learn what genuine, first pressed olive oil should taste like, how homemade pasta can be made by hand with simple ingredients, how great it is to see the healthy animals who produce the best cheese you’ve ever tasted.

Rachel Roddy blogs and writes about cooking and recipes from Rome and Sicily.

“I was travelling in Sicily and Rome to learn Italian, and ended up in Testaccio living in a flat above a trattoria. I had always cooked and written and began blogging in 2008 – when there weren't so many blogs – to document it for myself.

The blog led to a column with [UK newspaper] The Guardian, and I have written one book (My Kitchen in Rome) and am working on another. The books are very much about understanding where you are through food; when you write about food, you're writing about everything really, because it's such an integral part of life. The first book was about Testaccio, where the cooking is really resourceful – for example, I was a bit squeamish about offal, but it's so ordinary here that the older residents would be more shocked if you said you were buying chicken breasts, it seems extravagant. The second will be about Sicily, which is on the coast, so you feel the Arabic influence and because it's hot and volcanic you get really extraordinary tomatoes and aubergines.

I like finding things in common between different cuisines. I have a tendency to romanticize Italian food, but it deserves it. Everything is tied up with food in Italy, all the seasonal celebrations, and traditions have been preserved more.

My neighbours and friends were wonderful teachers. When you ask someone to teach you a recipe, all language barriers go down. Some Italians, especially my partner, can be critical – but I was happy to learn. I had never cooked Italian food so I was happy to be taught how to do things. My advice for anyone visiting Testaccio is to go to the markets, buy food from the stalls and find a sunny bench near Monte Testaccio. And as for anyone who wants to be a food writer, there is always space for a new voice, so read good food writing – and start writing yourself.”