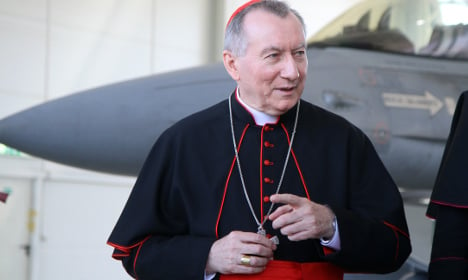 Parolin invoked an article of the Vatican's penal code allows him to decline to testify for professional reasons. Photo: AFP

Vatican number two Parolin, fellow cardinal Santo Abril y Castello and Archbishop Konrad Krajewski had all been asked to give evidence on behalf of one of the accused, PR consultant Francesca Chaouqui.

The three clerics invoked an article of the Vatican's penal code which allows them to decline to testify for professional reasons.

Parolin said in a statement to the latest hearing in the case on Saturday that he had done so because he had “nothing to say regarding the relations between Francesca Chaouqui and (co-accused Spanish priest) Monsignor Lucio Vallejo Balda”, specialist Vatican news agency IMedia reported.

Chaouqui, Balda and his assistant Nicola Maio are accused of leaking classified documents from a Vatican economic reform panel to reporters Gianluigi Nuzzi and Emiliano Fittipaldi.

The Italian journalists are also on trial for publishing the information in books detailing questionable practices in the Vatican's finances and real estate management.

The prosecution of the journalists has been condemned around the world and some officials inside the Vatican regard the entire case as a public relations disaster given the lurid nature of much of the evidence.

Chaouqui maintains she had nothing to do with any of the leaks while Balda has testified he did so under pressure from her after she made advances to him culminating in a “compromising” encounter in a Florence hotel in December 2014.

The PR consultant has also claimed that Balda had a homosexual relationship with an astrologer she introduced him to.

Several witnesses, including Monsignor Alfredo Abbondi on Saturday, have testified that Chaouqui boasted of having close ties to the Italian secret services and she has depicted a poisonous atmosphere inside a panel created on the express orders of Pope Francis himself.

In another embarrassing snippet to emerge from the trial, Abbondi defended himself and other clerics linked to the panel for organising a terrace cocktail party during the canonisation of Pope Jean-Paul II.

The priest said the cocktail party had been a “religious event with nothing worldly about it” which had been organised because the panel had not been granted enough tickets for the mass to mark the late pontiff's elevation to the sainthood.