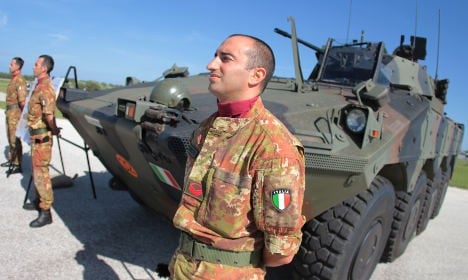 Italy will not be sending soldiers to protect UN structures in Libya. Photo: Marcello Paternostro/AFP

In late April, reports suggested Italy would send up to 900 troops to the country, some of which would protect UN structures as part of the United Nations Support Mission in Libya (UNSML) set to get underway later this month, following the arrival of UN special envoy to Libya, Martin Kobler.

However, Corriere della Sera reported that all troops on the UNSML would now come from Nepal.

Given the strength of Isis cells in Libya, repeated calls have been made for Italy to deploy troops to support pro-democracy forces in the war-torn country. But amid frequent speculation, Italy has consistently denied reports that it is preparing to send military forces.

Prime Minister Matteo Renzi is thought to be reluctant over concerns Italian troops would become targets for extremist groups and is instead trying to find diplomatic solutions to Libya's problems.

The news comes ahead of an international summit in Vienna on Monday, focusing on bringing stability to Libya, which has been in turmoil since the 2011 overthrow of leader Muammar Qaddafi.

Monday's meeting will be attended by Italy's Foreign Minister Paolo Gentiloni, representatives from the permanent members of the UN security council, US secretary of State John Kerry and Libya's interim Prime Minister Fayez al Sarraj, among others.

“The unity and stabilization of Libya remain a priority target for Italy,” Italy's Foreign Ministry said in a statement on Sunday.