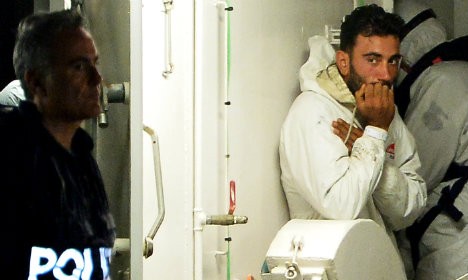 Mohammed Ali Malek (R) after being pulled from the water. Photo: Alberto Pizzoli/AFP

The accused skipper, Mohammed Ali Malek, claims he was a migrant himself and had been made to steer the boat by the real traffickers.

Other survivors of the worst disaster in the Mediterranean since World War II have testified that he was the captain of the boat from the outset and that he was helped by a Syrian first mate, Mahmoud Bikhit, for whom prosecutors have asked for a six-year jail sentence.

The trial in the Sicilian port of Catania was adjourned until next month, when the defence will present its case against the charges of manslaughter, causing a shipwreck and facilitating illegal immigration.

Italy's coastguard last week began an operation to raise the ship from the seabed so that the roughly 600 corpses thought to be inside it can be identified if possible, before being given decent burials.

The operation was suspended at the end of the week due to bad weather and the navy has not released any details of when it will resume.

The perilously overcrowded migrant boat sank on the night of April 18th last year after running into a Portuguese freighter which had gone to its rescue. The collision sent panicked passengers stampeding to one side, causing the vessel to keel over.

Only 28 people survived and their testimonies suggest over 800 people were on board when the ship left Libya.

Fifty bodies were recovered in the hours following the sinking and a further 171 have since been brought up from around the wreck.

The Italian government has earmarked space in Sicilian cemeteries for burials after forensic expert log DNA, fingerprint and other details to see if any of the victims can be identified.

Around 9,000 migrants have lost their lives in the Mediterranean since a mass influx of asylum seekers and others began in mid-2013.