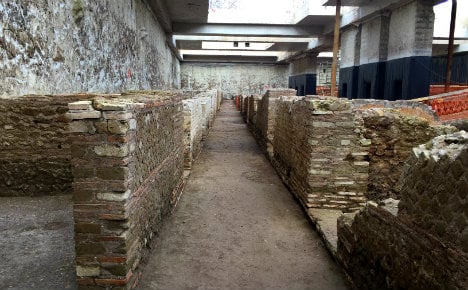 The remains of a second century imperial barracks were found nine metres below street level in November, when construction began on Amba Aradam-Ipponio station on the city's new metro Line C.

The 1,753 square-metre ruin contains some 39 rooms, many of which contain original mosaics and frescoes.

Lying so deep under the city, it was impossible for modern survey equipment to detect the ruin before work began. But work on the station is ploughing on in spite of the incredible, yet inconvenient, find.

The city's archaeological superintendent, Francesco Prosperetti, promised on Monday that the building site would not be closed and that the ruins would be safeguarded so that future passengers could enjoy them.

“Work havs not been stopped, instead we will find a use of space which will allow the extraordinary archaeological heritage beneath the Roman soil to become part of the city's modern infrastructure,” Prosperetti said.

Authorities are now considering incorporating the barracks in one large metro stop-cum-museum structure.

“At the moment we're waiting for Roma Metropolitana [the company building the station] to draw up plans,” Luca Del Frà, spokesperson for Rome's archaeological superintendency, told The Local.

“It's possible that some structure will need to be dismantled and moved but the ruin will be on display at the station when it opens,” added Del Frà.

Authorities say the find won't affect the cost of the new station, which is located close between the iconic Colosseum and Imperial forum, as the budget for Line C already includes generous allowances for dealing with inevitable archaeological finds.

According to Rome City council, Amba Aradam-Ipponio will be operational by 2021 but Line C is said to be the slowest and most expensive metro line in the world.

The first segment of the line publicly opened in November 2014, some 20 years after the project was first conceived.

So far, the 18km of the line in operation has cost city coffers more than €20 billion.