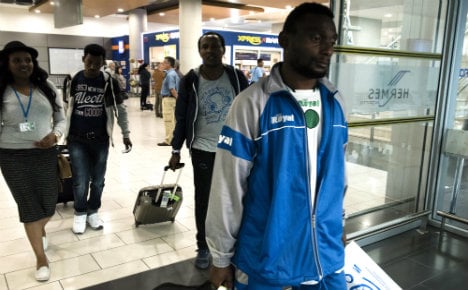 The young men – three from Eritrea and the other from central Africa – are the first batch to arrive from Italy in Cyprus and the second to be accommodated on the Mediterranean island under the scheme.

Soon after arriving at Larnaca airport on Tuesday evening the four were taken to a reception centre near the southern coastal town of Kofinou.

The first group of six asylum-seekers – from Syria, Iraq and Eritrea – were relocated from Greece in February.

The transfers are part of the EU relocation programme agreed by the European Union institutions and a number of member states in September 2015.

Under the scheme, Cyprus pledged to accept the relocation of 440 asylum-seekers from Greece and Italy – the worst hit countries in the migrant crisis.

Cyprus has also agreed to offer resettlement places for 69 vulnerable refugees selected by the UNHCR in countries outside the EU.

The EU responsibility-sharing scheme, which foresees the relocation of 160,000 refugees from Italy and Greece, is seen as an important step towards stabilizing the biggest refugee crisis that Europe has seen in decades.

More than one million people arrived by sea in Europe in 2015. The majority were refugees fleeing persecution and violence in Afghanistan, Iraq and Syria.

In 2015, Cyprus received 2,105 asylum applications, including 908 from Syrian nationals.