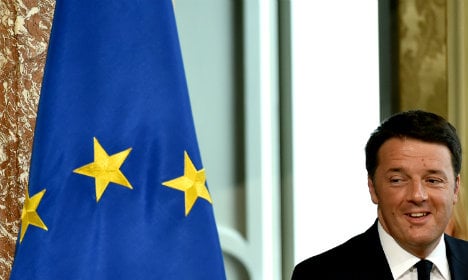 Matteo Renzi has spoken of his pleasure in being granted more budgetry flexibility by the EU. Photo: Thierry Charlier/AFP

The move was revealed in a letter from the European Commission that Italy published on the eve of the EU executive's release of its assessment of whether Eurozone countries are sticking to Stability Pact rules on their public finances.

The letter confirms that Brussels has granted Italy's demand for spending equivalent to 0.85 percent of its GDP to be effectively stripped out of the calculation of whether Rome is acting fast enough to cut its huge national debt.

The Commission said it was granting the leeway on condition that Italy stands ready to tighten its belt more than currently planned in 2017.

But it failed to win any clear commitment on that score. Italian Finance Minister Pier Carlo Padoan replied to the Commission's letter by saying he was confident Italy would “broadly comply” with EU requirements in 2017 on the basis of his current fiscal plans.

Renzi said the flexibility granted by Brussels was worth “lots of money” for Italy.

“(It is) less than I would have liked and it is not a solution for every problem, but it is the principle of flexibility,” he said.

“It means a green light for investment that otherwise would have been blocked.”

Italy has argued strongly in favour of the EU's deficit and debt rules being interpreted in a way that means one-off or exceptional spending is not included in the calculation of whether a country is compliant.

In its budget for 2016, it proposed discounting amounts equivalent to 0.5 percent of GDP to cover the cost of implementing structural reforms, 0.25 percent for infrastructural investment and a total of 0.1 percent for costs related to the migrant crisis and anti-terrorism measures.

Brussels granted them all – on condition that Italy does what is needed to get its budget deficit to GDP ratio down to 1.8 percent.

“It must be recalled that no other Member State has requested nor received anything close to this unprecedented amount of flexibility,” the Commission's letter states.

It later notes that “our current assessment of the planned fiscal effort for 2017 indicates a projected gap of between 0.15 percent and 0.2 percent of GDP.”

In his reply, Padoan gave no commitment to tightening his fiscal stance, stressing instead the need for growth friendly policies at national and European levels to bolster a slow recovery.

“In this complex scenario, let me reiterate the commitment, including the planned fiscal effort, taken by the Italian Government … to broadly comply with EU fiscal rules in 2017,” he wrote, adding he was confident Italy would avoid “significant deviation” from Brussels' requirements.

Although Italy's deficit is well under the three percent ceiling enshrined in the EU's Stability Pact, Rome is under pressure to cut its annual borrowing requirement as a means of bringing down its huge debt mountain.

This currently stands at €2.2 trillion, equivalent to more than 130 percent of the country's annual economic output. Renzi has pledged that the debt level will fall this year for the first time since 2007.

The Italian premier has been a vocal critic of what he sees as EU austerity. Italy's budget for this year includes tax cuts and new spending worth around €30 billion, around half of which is being financed by letting the deficit run higher than it otherwise would.

Renzi says the measures are essential to consolidate Italy's tentative recovery from a triple-dip recession.